Police fired teargas to disperse protesters who stormed a local government office in the Mediterranean port of Sfax. Tunisia's biggest labour organisation, UGTT, called for a general strike on Friday. 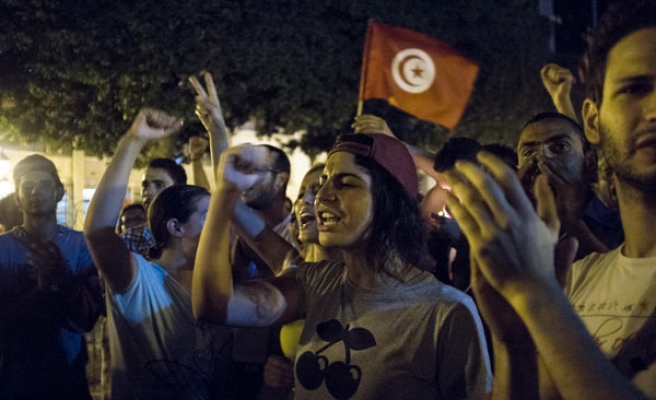 Tunisian opposition politician Mohamed Brahmi was shot dead on Thursday in the second such assassination this year, setting off violent protests against the government in the capital and elsewhere.

"This criminal gang has killed the free voice of Brahmi," his widow, Mbarka Brahmi, told Reuters, without specifying who she thought was behind the shooting outside their home in Tunis.

Brahmi's sister later accused the main Islamist Ennahda party of being behind the killing. "Ennahda killed my brother," Souhiba Brahmi said. Ennahda has condemned the killing.

The politician's wife said Brahmi had left the house after receiving a telephone call. She heard shots and found his body lying on the ground outside as two men fled on a motorcycle.

Brahmi belonged to the secular, Arab nationalist Popular Front party, whose then-leader, Chokri Belaid, was killed in a similar way on Feb. 6. His death ignited the worst violence in Tunisia since President Zine al-Abidine Ben Ali fell in 2011.

Brahmi, 58, was a critic of the Ennahda-led ruling coalition and a member of the Constituent Assembly that has drafted a new constitution for the North African nation of 11 million.

The U.S. State Department called for a "transparent and professional" investigation, while French President Francois Hollande urged Tunisians to show "the necessary spirit of responsibility to preserve national unity and guarantee the pursuit of the democratic transition".

U.N. human rights chief Navi Pillay called for the killers to be brought to account and said the government must do more to "deter these terrible acts" and protect people at risk.

Thousands of people protested outside the Interior Ministry in Tunis and a hospital in the Ariana district where Brahmi's body had been taken. "Down with the rule of the Islamists," they chanted, and demanded that the government resign.

Big crowds accompanied Brahmi's body when it was taken later for autopsy at another Tunis hospital. Despite the presence of hundreds of soldiers and police, protesters smashed cars and broke some windows of the hospital in Ariana, witnesses said.

In Tunis, riot police fired teargas in front of the Interior Ministry to try to disperse protesters, a Reuters witness said.

"Thousands have taken to the streets. People have blocked roads and set tyres alight," said Mehdi Horchani, a resident of Sidi Bouzid. "People are very angry."

Tunisia's biggest labour organisation, UGTT, called for a general strike on Friday to protest Brahmi's killing. Its secretary-general, Hussein Abbasi, earlier predicted that the assassination would lead the country into a "bloodbath".

All flights to and from Tunisia will be cancelled on Friday after a general strike was called by the main labour organisation, the civil aviation office said.

"All flights to and from Tunisia will be cancelled tomorrow because the workers at the airport responded to the calling of the general strike", a spokesman said.

Tunisia's political transition since the revolt that toppled Ben Ali has been relatively peaceful, with the moderate Ennahda party sharing power with smaller secular parties.

But the government has struggled to revive a stuttering economy and has come under fire from secularists who accuse it of failing to curb the activities of Salafi Islamists.

The government blamed Belaid's assassination, also carried out by assailants on a motorcycle, on an unidentified group of Salafi militants, saying six of them were still on the run.

The Egyptian army's overthrow of President Mohamed Morsi on July 3 following mass protests against him has further energised the anti-Islamist opposition in Tunisia.

A protest movement known as Tamarod, modelled on the Egyptian group of the same name that orchestrated the anti-Morsi demonstrations, has called for rallies to topple the government.

Prime Minister Ali Larayedh condemned the assassination, but said, "We are against all the calls to dissolve the government and the Constituent Assembly to create a (power) vacuum."

He also drew a link to the upheaval in Egypt, saying in a televised address that the assassins had aimed to use events there "to try to undermine our process and derail it, and take the country into the unknown, whether it is chaos, fighting or civil war or a return to despotism or a return to square one".

"Tunisia will not follow the Egyptian scenario," he told Reuters. "We will hold on."

After the killing of Brahmi, who had applauded the Egyptian army's removal of Morsi, the leader of hisPopular Front called for non-violent action to oust the Tunisian government.

The assassination occurred on Tunisia's Republic Day as the country prepares to vote in the next few weeks on the new constitution before a presidential election later in the year.

Samir Gadio, at Standard Bank, said he expected political and economic conditions to deteriorate further in the next few months, saying Ennahda was losing popularity and might seek to delay adoption of the constitution and the holding of elections.

"While Tunisia's army is not influential in the political process, unlike in Egypt, the risks of an institutional dislocation or even a military intervention are increasing," he said.