Shops and banks were shuttered in anticipation of violence on Friday. All flights were cancelled because of a strike called by the main labour organisation, the civil aviation office said. 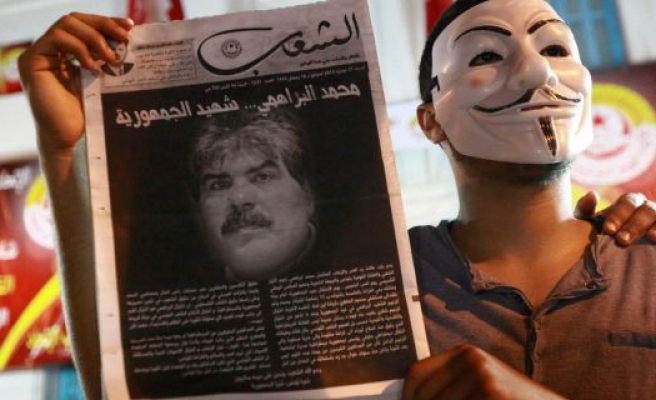 Shops and banks in Tunisia were closed and all flights cancelled on Friday as the country braced for more street violence a day after the assassination of an opposition politician.

Mohamed Brahmi was shot dead on Thursday in the second such political killing this year, which prompted violent protests against the government in the capital and other cities and a strike call by the main trade union body.

Tunisians were prepared for another difficult day after the secular opposition called for street rallies to topple the government led by the Ennahda Party. Islamists called for a demonstration after Friday prayers.

Brahmi belonged to the secular, Arab nationalist Popular Front party, whose then-leader, Chokri Belaid, was shot dead on February 6. Belaid's killing set off the worst violence in Tunisia since President Zine al-Abidine Ben Ali fell in 2011 in the first of the Arab Spring revolutions.

Brahmi, 58, was a critic of the Ennahda-led ruling coalition and a member of the Constituent Assembly that has drafted a new constitution for the North African nation of 11 million.

Shops and banks were shuttered in anticipation of violence on Friday. All flights were cancelled because of a strike called by the main labour organisation, the civil aviation office said.

Divisions between Islamists and their secular opponents have deepened since the popular uprising against Ben Ali, which unleashed unrest across the Arab world, unseating rulers in Egypt, Libya andYemen, and leading to civil war in Syria.

Brahmi's family said his funeral would take place on Saturday and he would be buried near the tomb of Belaid.

Secularist called for the dissolution of the government and the formation of a national salvation administration, which was rejected by Prime Minister Ali Larayedh.

In Tunis late on Thursday, riot police fired tear gas in front of the Interior Ministry to disperse protesters, a Reuters witness said.

Similar demonstrations erupted in the cities of Sfax and Kef and in the southern town of Sidi Bouzid, the cradle of the Tunisian revolution, where protesters set fire to two Ennahda party offices.

The interior minister is scheduled give details of Brahmi's killing at a news conference later on Friday.

Tunisia's political transition since the revolt that toppled Ben Ali has been relatively peaceful, with the moderate Islamist Ennahda party sharing power with smaller secular parties.

But the government has struggled to revive the economy and has come under fire from secularists who accuse it of failing to curb the activities of Salafi Islamists.

The Egyptian army's overthrow of President Mohamed Morsi on July 3 following mass protests against him has further energised the anti-Islamist opposition in Tunisia.

"Tunisia will not follow the Egyptian scenario," he told Reuters. "We will hold on."

After the killing of Brahmi, who had applauded the Egyptian army's removal of Mursi, the leader of hisPopular Front called for non-violent action to oust the Tunisian government.

The assassination occurred on Tunisia's Republic Day as the country prepares to vote in the next few weeks on the new constitution before a presidential election later in the year.