Around 27 politicians vied for the top post in Tunisia. A candidate needs to win 50% + 1 of total votes to be declared as the country's new president. 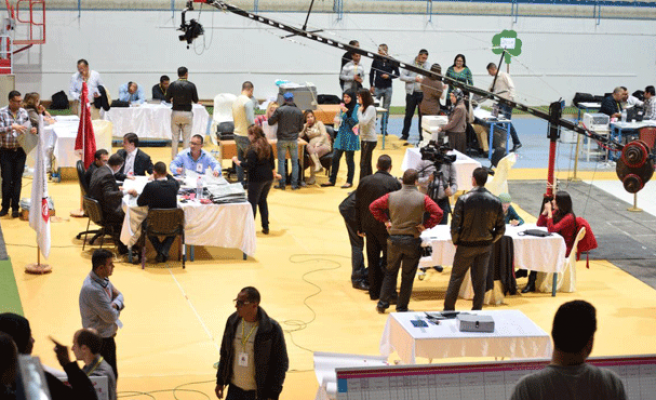 Polling stations across Tunisia have closed their doors, bringing to an end voting in the country's presidential elections, the first since 2011.

After counting nearly two-thirds of votes in Tunisia's presidential election, front-runners Beji Caid el-Sebsi and Moncef Marzouki were seen heading to a run-off.

Initial results showed that Sebsi, head of the centrist Nidaa Tounes party, snatched nearly 42 percent of votes, while incumbent president Marzouki got 34 percent, according to an Anadolu Agency tally.

The campaigns of both Sebsi and Marzouki conceded that none of the two candidates secured an outright victory in Sunday's vote.

Nearly 65 percent of the voters had cast their ballots to select a new president, according to Chafiq Sarsar, the head of Tunisia's election commission.

He told a press conference that 27 percent of registered voters outside Tunisia had also voted during the same period.

A total of 27 candidates, including a woman, are vying to win Tunisia's top post, which was kept for 24 years by Zine al-Abidine Ben Ali, before a popular uprising ended his regime in 2011.

In Tunisia's western Kasserine city, youths made themselves scarce at polling stations for the country's presidential elections.

On the streets of the city, which was hard-hit by a heavy-handed crackdown on militants holed up in the nearby Chaambi Mountains, elderly men and women took their places in long queues outside the polling stations.

Youths were present in large numbers as well, but somewhere else, namely in the city's coffee shops, in an apparent lack of interest in the elections that should give Tunisia its first president after the 2011 popular uprising that ended the rule of long-serving president Zine al-Abidine Ben Ali.

"This lack of interest is strange," Assad, 28, told The Anadolu Agency as he waited for his turn to cast his vote in the election.

"Youths who did not show up for the polls made a mistake that would harm Tunisia's future."

Bucking the youths' trend was Taher, a 87-year-old, who took his place in the queue outside the polling station and was full of enthusiasm to select the candidate who will lead his country in the coming years.

"It is irresponsible [on the part of youths] to sit at coffee shops on a day like this one," Taher said, leaning on his walking stick.

"I am here to vote so that peace and security would prevail and that terrorism would be eradicated from the country," he added.

Last month's parliamentary election also saw a weak turnout of young voters, who make up around 60 percent of all names in voter rolls.

At the time, observers attributed this low youth turnout to the failure of post-revolution governments to achieve the objectives of this revolution, which included unemployment reduction and the creation of openings for youths.

Tunisia's incumbent interim president and presidential candidate Moncef Marzouki called on his country's democracy forces, youths and women to support him in a possible second round of Tunisia's presidential election.

"I call on youths and women to support me," he added in his first remarks following the end of the presidential election earlier on Sunday.