Following the protester's death, the UGTT renewed for a ban on using birdshot to disperse demonstrations in Tunisia 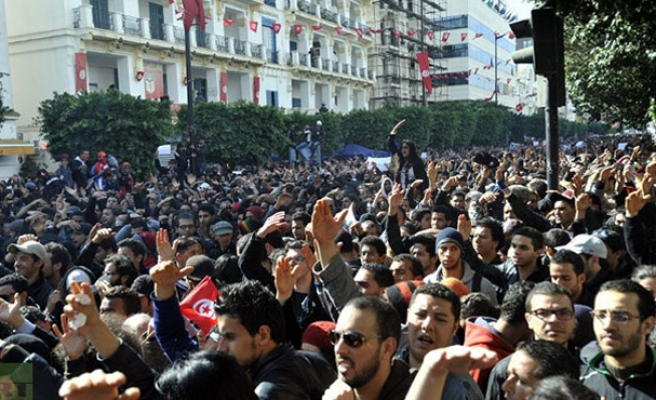 A general strike was declared on Tuesday in Tunisia's Tataouine province near the border with Libya, two days after deadly clashes with security forces left a protester dead and another injured.

Protesters in the cities of Tataouine and Ben Gardane staged mass rallies on Tuesday in response to calls by Tunisia's largest trade union and the local provincial council.

Tunisia's influential trade union, the UGTT, along with Tataouine's provincial council, had called on public and private institutions in the province –except for hospitals and pharmacies – to take part in a general strike on Tuesday.

Following the protester's death on Sunday, the UGTT renewed calls for banning the use of birdshot by police to disperse demonstrations.

"Once again, the union is calling for a complete ban on the use of birdshot to disperse popular protests," the UGTT said in a Tuesday statement.

On Sunday, a protester was killed and several others injured when police clashed with angry demonstrators who took to the streets in the town of Dehiba to protest the imposition of a 30-dinar tax (roughly $15.6) on all foreign nationals entering Tunisia from Libya via the Ras Ajdir border crossing.

A police checkpoint was also set ablaze during the clashes.

On Monday, the secular Nidaa Tounes party and the Ennahda movement – Tunisia's two main political parties – both called for an investigation into the protester's death.

Tataouine Governor Saber al-Madnani told that a ministerial delegation would be dispatched to the province on Wednesday.

Activist Daw al-Zuheibi, however, vowed that "peaceful protests" would continue until demonstrators' demands were met.

Government spokesman Ahmed Zarrouk, for his part, has said the authorities might reconsider the controversial new tax.