The leading party in Tunisia held the party's 9th convention which was open to the press corps after 40 years on Tuesday. 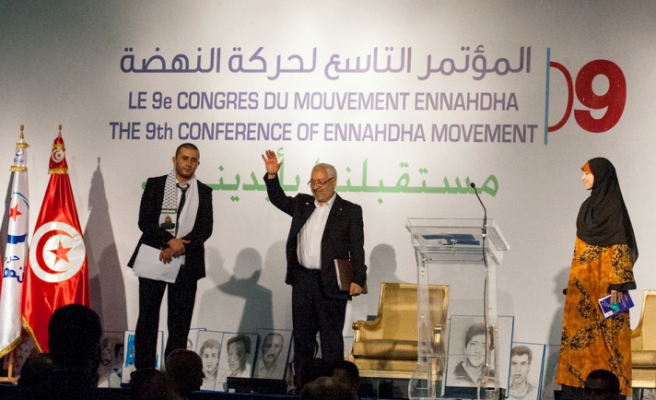 Sheikh Rashid Al Ghannouchi has been re-elected the leader of the moderate Islamist party Al Nahda Movement with gaining 72 percent of the votes on Tuesday.

The ruling party in Tunisia held the party's 9th convention which was open to the press corps after 40 years on Tuesday.

At the convention Al-Ghannouchi gained 72 percent of the votes and was re-elected the leader of the party.

Speaking at the convention, Abdullatif Al-Makki, chairman of the convention, said that the party would be cooperate strategically with national powers against former regime supporters in the country.

Banned under Zine al-Abidine Ben Ali, who was toppled last year in mass protests that sparked the Arab Spring, Ennahda won the most seats in elections to a constituent assembly in October and formed a government in coalition with two secular parties.

Twelve leading Ennahda officials competed for the post. Among them were Sadek Chorou and Habib Elouz, both who pushed for Ennahda to support the inclusion of Islamic law in the constitution currently being drawn up by the elected constituent assembly.

Abdel Fattah Mourou, a co-founder of Ennahda who was excluded from the movement in the 1990s, returned to the fold at the congress and also ran for the top job.

Some 1,103 Ennahda members voted to elect the president and secretary general as well as a powerful 150-member consultative committee.

Ghannouchi, Ennahda's co-founder and current leader, is a respected scholar.

Ennahda was founded as an underground organisation in the 1970s and went public in 1981, sparking a fierce crackdown by Tunisia's independence hero and then-president Habib Bourguiba, a staunch secularist who brooked no dissent. Ghannouchi was among the Ennahda members jailed during the 1980s.

After promising reforms, Bourguiba's successor Ben Ali again cracked down on opponents in the 1990s, arresting thousands of Ennahda supporters. Many fled abroad.

Ghannouchi went to London, where he was to spend more than 20 years, returning after the revolution last year.

Ghannouchi will lead the party until the party votes again at an extraordinary conference in 2014.