Interim Prime Minister Beji Caid Sebsi said the ban was effective immediately to "stop any union activity of the security forces given the dangers it represents for the country's security". 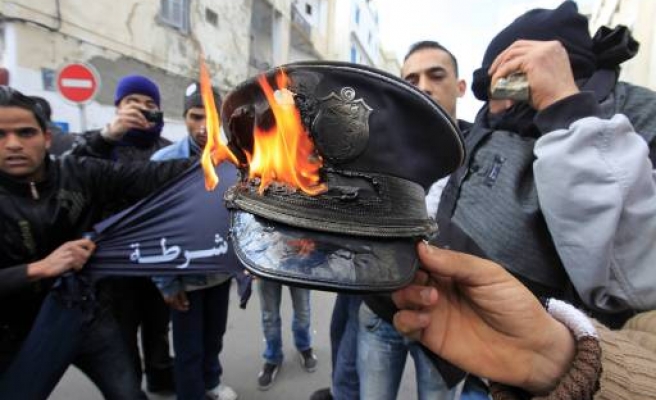 Tunisia banned the security forces from joining unions on Tuesday, prompting hundreds of police to protest against a transitional government that some Tunisians say has betrayed their "Arab Spring" uprising.

Interim Prime Minister Beji Caid Sebsi said the ban was effective immediately to "stop any union activity of the security forces given the dangers it represents for the country's security".

Hundreds of police quickly gathered outside his office in the centre of the capital Tunis, some wearing civilian clothes with armbands saying 'police' and others in uniform. They shouted slogans calling for an end to government corruption.

The protest was the latest against the transitional government, which has been struggling to restore stability since mass protests ousted president Zine Al-Abidine Ben Ali on Jan. 14 after 23 years in power.

Sebsi reiterated that Tunisia's elections to a constitutional assembly to write a new constitution would take place on Oct. 23 after a delay of several months.

"The elections will take place at the fixed deadline, whether some like it or not," he said.

Tunisia electrified the Middle East in January when its revolution became the template for uprisings across the region -- especially in Egypt and Libya.

But, whereas Egypt's Hosni Mubarak is facing trial in Cairo and Libya's Muammar Gaddafi is on the run, Ben Ali is in exile in Saudi Arabia and many Tunisians say he and his supporters should have been prosecuted more vigorously.

They suspect some in the interim government of sympathising with him.

There was an outpouring of anger after the justice minister under Ben Ali was released from jail and a high-profile friend of the ex-president's wife was able to flee to Paris.

Last month, Tunisian security forces used teargas against protesters in the capital demanding the government step down for failing to prosecute supporters of the ousted president. Thousands of people also protested in other towns and cities.