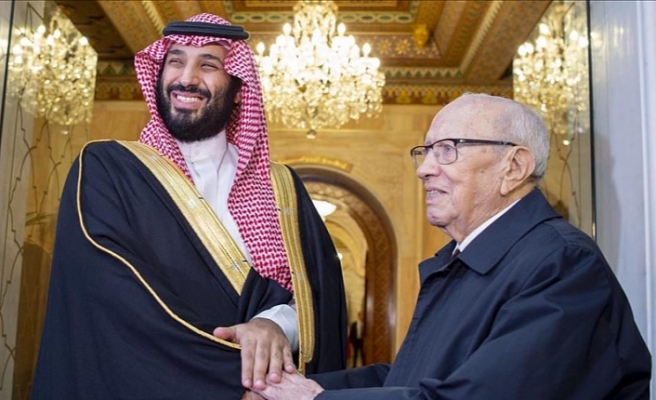 They also discussed preparations for the 30th ordinary session of the Arab League to be held in Tunisia in March 2019.

Bin Salman is visiting Tunisia as part of a wider regional tour that has already brought him to the United Arab Emirates and Egypt.

"I felt honored when the crown prince told me 'I'm your son'. I feel honored to meet him as well," Essebsi told the local press after their meeting.

He said the visit will be beneficial for bilateral relations.

“We have very good ties with Saudi Arabia. We say [to the crown prince] 'Welcome to your own country'," Essebsi told bin Salman, who seemed impressed with his amiable manner.

But a number of people in Tunisia, including journalists and politicians, protested against bin Salman over his alleged role in the murder of Saudi journalist Jamal Khashoggi and possible war crimes in Yemen by the Saudi-led coalition, over which Human Rights Watch filed charges against him in Argentina ahead of his visit there this week for the G20 summit.

A frequent contributor to The Washington Post, Khashoggi went missing on Oct. 2 after entering the Saudi consulate in Istanbul.

After initially denying knowledge of his whereabouts, the Saudi authorities later admitted that Khashoggi had been killed inside the consulate.

In advance of the visit, activists staged several demonstrations in Tunis against bin Salman.

On Monday, a group of Tunisian lawyers called for an investigation into his involvement in both the ongoing Saudi-led war against Yemen’s Houthi rebel group and last month’s killing of Khashoggi.

Bin Salman is expected to visit Algeria and Mauritania as part of his tour before attending the G-20 summit in Argentina on Friday and Saturday.