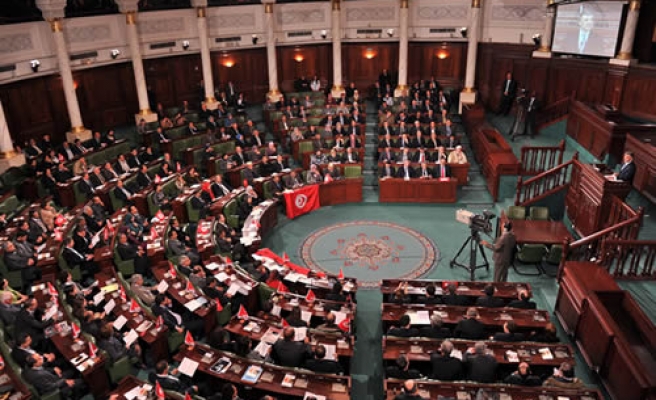 Tunisia's first full elected parliament held its opening session on Tuesday with a challenge to implement the democracy its people sought when they marched in the 2011 revolt against autocrat Zine el-Abidine Ben Ali.

Parliamentarians are set on Tuesday to vote to elect a speaker and two deputies and to establish a committee to draft the new assembly's bylaws.

The 217-member House of People's Representatives was the product of Tunisia's first democratic parliamentary elections held on October 26.

The country that saw the first of the Arab Spring revolts chose a temporary national assembly in 2011 to draw up the new constitution approved early this year. The full parliament will sit for the next five years.

That constitution has been hailed as one of the most progressive in the Arab world and an example of Tunisia being a model for transition in a regional in turmoil.

"We have achieved the theoretical side by approving a progressive constitution but today we face the toughest stage, which is how we apply this constitution," Mustapha Ben Jaafar, president of the former transitional assembly, told lawmakers.

Controversy has surrounded Tuesday's first session over the absence of interim President Moncef Marzouki from the session.

Local media pointed out to the absence of Marzouki, also a frontrunner in the upcoming presidential run-off, from Tuesday's session which presidential media attaché Shaker Bouguila said was due to not having received an official invitation from the NCA.

"[Marzouki] was not invited by the constituent assembly to attend the session despite an [interim] legislation necessitating the procedure," Bouguila told The Anadolu Agency.

For his part, Marzouki's presidential campaign director Adnan Moncer said on Facebook that the legislation, passed in late 2011, was "ignored."

"Many are acting as though they are unaware that the president cannot be present at the assembly without an invitation," he said.

Ben Jaafar, however, asserted that the issue of not inviting Marzouki to Tuesday's session was a matter of "protocol, not politics."

"According to customs, it is not mandatory for the president to attend the handover from an [outgoing] legislative authority to a new one," he told reporters following the session.

The first major item on the agenda is forming a new government. The main secular party Nidaa Tounes wants to create a coalition with smaller parties and name a prime minister.

Nida Tounes won last month's general election with 86 seats in new 217-seat parliament, ahead of the rival Ennahda party with 69 seats and smaller parties that took the rest.

But government formation will likely wait until after a presidential election runoff this month between incumbent Moncef Marzouki and veteran politician Beji Caid Essebsi, leader of Nida Tounes. The exact date of the runoff was due to be announced by Wednesday at the latest.

The opening session was expected to elect the president of the new parliament, but both Nida Tounes and Ennahda asked for more time for consultations and negotiations.

Over 60 percent of Tunisia's 5.2 million eligible voters turned up for the parliamentary polls, the first since a 2011 uprising ousted longtime autocrat Zine al-Abidine Ben Ali.