"The UGTT calls for dissolving the current government and creating a technocratic government led by an independent figure," General Secretary Hussein Abbassi said in statement. " 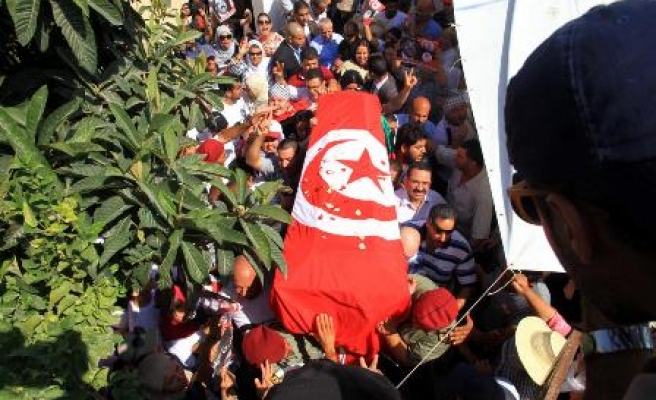 Tunisia's largest labour union called on Tuesday for the dissolution of the government, and the interior minister, a leading independent, said he was ready to resign.

The moderate Ennahda party has faced mounting protests since the death in February of a leading secular politician, whose killing sparked the worst crisis since Tunisia's autocratic leader fell two years ago.

On Monday, one of Ennahda's junior coalition partners, the secular Ettakatol party, threatened to withdraw unless a new unity government were formed, something it said was necessary to end the widespread and increasingly violent protests.

The Tunisian General Labour Union (UGTT) said a technocratic government should replace the one led by Ennahda, which has defied growing calls to resign by a secular opposition emboldened by the overthrow of Egypt's Islamist leader.

The protests in a country that led the first of the "Arab Spring" revolutions grew on Tuesday, when gunmen killed eight soldiers near the Algerian border, an area where Tunisia has been hunting for Islamists, in one of the bloodiest attacks on Tunisian troops in decades.

"The UGTT calls for dissolving the current government and creating a technocratic government led by an independent figure," General Secretary Hussein Abbassi said in statement. "We consider this government incapable of continuing its work."

Interior Minister Lotfi Ben Jeddou - a judge and political independent from the al-Qasreen area close to the site of Monday's ambush - later said he was ready to stand down.

"I have a great wish to resign, and I am ready to resign," he told the local Mosaique radio station. "A salvation government or national unity government must be formed to get Tunisia out of this bottleneck."

Tunisians fear the return of political chaos just two years after Ben Ali was forced to flee during an uprising that set off revolts against autocratic rulers across the Middle East.

The opposition, angered by the assassination of leading leftist figures Chokri Belaid in February andMohamed Brahimi on Thursday, has been emboldened by the Egyptian army's ouster of Mohamed Mursi, and has rejected several concessions and power-sharing proposals from the Ennahda-led coalition in recent days.

It has been courting the UGTT - a powerful force with around 600,000 members it could call on to strike - to get its support for calls to oust the government and dissolve the transitional Constituent Assembly, tasked with creating a draft constitution.

The UGTT said that while it supported the call for a new government it would not back the dissolution of the Constituent Assembly, which is only weeks away from completing a draft constitution to put to popular referendum.

Critics of the opposition say dissolving the Assembly and its draft constitution would risk even more long-term political instability.

"We propose maintaining the Constituent Assembly but ... with a time-frame to speed up completion of its work," Abbassi said. "We will be proposing this to all political parties because there is a need to clear the political bottleneck in this country."