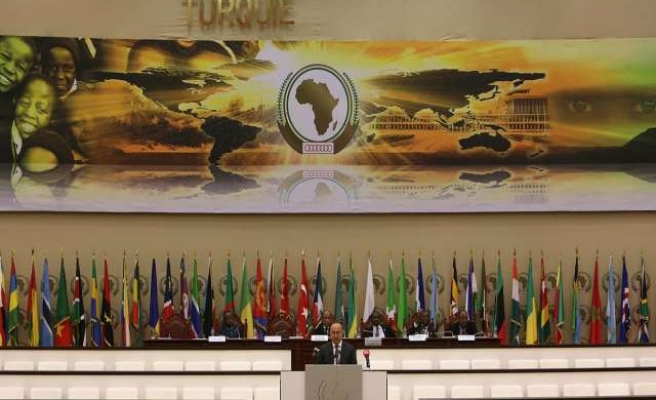 The second Turkey-Africa cooperation summit kicked off on Wednesday in Malabo, capital of Equatorial Guinea, at the ambassadorial level.

"We should see a changed and enhanced partnership, not only in number but also in quality," Erastus Mwencha, deputy chairperson of the African Union Commission, told the meeting.

The official put textiles on the list of sectors that Turkey could contribute to significantly.

Ambassadors and experts from both Turkey and Africa are currently drawing up documents for consideration by cabinet ministers on Thursday before their adoption by heads of state and government on Friday.

They are expected to consider a "Joint Implementation Plan of Africa-Turkey Partnership 2015-2018," featuring key areas of cooperation.

Ambassadors and experts will also look into a "Matrix of Key Priority Projects of the Africa-Turkey Partnership 2015-2018" with the aim of discussing the way forward on proposed key priority projects.

Seven short-term projects have been proposed by the African side from the agreed overall Joint Implementation Plan 2015-2018.

The summit – which has prompted the first-ever visit to Equatorial Guinea by a Turkish president – will advance to the ministerial level on Thursday before being wrapped up by heads of state the following day.

Two hundred business leaders, along with a delegation led by Turkish President Recep Tayyip Erdogan and including Turkish Foreign Minister Mevlut Cavusoglu, are attending the three-day summit, in addition to leaders from several African countries.

Turkish Foreign Minister Mevlut Cavusoglu on Friday said that Turkey-Africa trade will hit the mark of $50 billion in a period of five years from 2015.

“In the last decade, the total volume of Turkey’s trade with Sub-Saharan Africa has increased tenfold,” Cavusoglu said, speaking at the 2nd Turkey-Africa Summit in Malabo.

“Africa has now taken its destiny into its own hands,” he said.

“Africa is clearly taking off,” he said. “The continent has recorded an annual growth rate of over 5 percent.”

The summit is being held under the theme: “The New Model of Partnership for the Strengthening of Sustainable Development and Integration.”

Mauritania – current chair of the African Union – and Ethiopia – the union's outgoing chair – are both attending this year's summit, along with Algeria, Nigeria, South Africa, Senegal, Libya, Zimbabwe, Kenya, Ghana, Chad, the Democratic Republic of Congo and Egypt.

Thirty-two other African countries are attending the event as observers.

Most invited countries are being represented at the event by their respective heads of state.

Egyptian President Abdel-Fattah al-Sisi, however, is not expected to attend the summit.

A joint declaration and action plan for Turkish-African partnership from 2015 to 2018 is expected to be approved at the summit, which is being held under the banner, "A new model for partnership for strengthening sustainable development and integration in Africa."

Priority areas of partnership for the period ending 2018 will be health, cultural exchange, trade and investment, scholarships, peace and security.

The African Union declared Turkey a strategic partner in 2008 and a Turkey-Africa summit was held the same year in Istanbul, which was attended by representatives from 49 African countries.

A third summit is scheduled to be held in Turkey in 2018.

Opening up to Africa

Ambassador Ali Kemal Aydin, deputy secretary of the Turkish Foreign Ministry, said his country was committed to forging a friendship and partnership with Africa.

"Turkey and Africa have never been distant to each other in the sense of caring for each other," he told the launch meeting.

"The coming two days will usher in a new period in the Turkey-Africa partnership," he said. "We are fully aware of Africa's priorities."

Aydin said Turkey gave priority to projects in the fields of agriculture, agribusiness, rural development, civil defense, water resource management, the development of micro- and small-scale enterprises, security, health and transportation, among many others.

"We recognize the importance of this partnership, since it is increasingly credible," said Agapito Mba Mokuy, a representative of Equatorial Guinea's foreign minister.

In an article entitled, "Turkey-Africa: Solidarity and Partnership," Cavusoglu said Turkey considers itself a strategic partner of Africa, working together for the advance of democracy, good governance and prosperity.

Written by the minister himself, the article was recently published in various African media outlets.

The minister said that, since 2005, Turkey had stepped up its engagement with African countries.

Turkey, he added, had since become an important partner for development, trade and investment on the African continent.

According to data released by the Turkish Foreign Ministry, trade volumes between Turkey and the countries of Sub-Saharan Africa have increased more than tenfold over the past 13 years, reaching $7.5 billion in 2013 – up from a mere $742 million in 2000.

Turkey embarked upon a new policy in 2013 under the rubric of a "Turkey-Africa Partnership" initiative, which takes as its motto: "African issues require African solutions."

"Turkey will remain committed to fully supporting the African Union in achieving its goals on priority areas, which will further consolidate African ownership of African issues," the foreign minister asserted.

He added: "That is why we feel it is a privilege for Turkey to be a strategic partner of the rising continent of Africa."