'I consider Guinea as a friendly country. Beyond friendship, I consider it as a brother country,' Erdogan says during his visit to Guinean capital Conakry 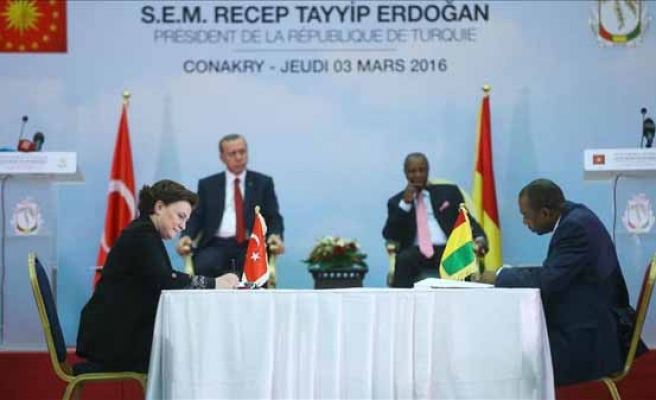 Addressing a joint press conference with Guinean President Alpha Conde after an inter-delegation and bilateral meeting in the Guinean capital Conakry Thursday, Erdogan said: "I consider Guinea as a friendly country. Beyond friendship, I consider it as a brother country. The responsibility of being a brother is big for us".

The Turkish president was also awarded the "Grand Croix" medal of honor during the signing ceremony for the agreements.

Erdogan also announced that Turkish Airlines will start its flights to Guinea as soon as June.

Conde said Guinea can learn many things about development from Turkey.

He said his country will welcome opportunities that Turkey and other such friendly countries offered.

Erdogan later departed for Turkey after the signing ceremony.

Guinea was the last stop in Erdogan's four-nation tour of West Africa. He visited the Ivory Coast, Ghana and Nigeria before arriving in Guinea.