The LRA is a notorious rebel group blamed for abducting, killing and displacing local populations across East and Central Africa 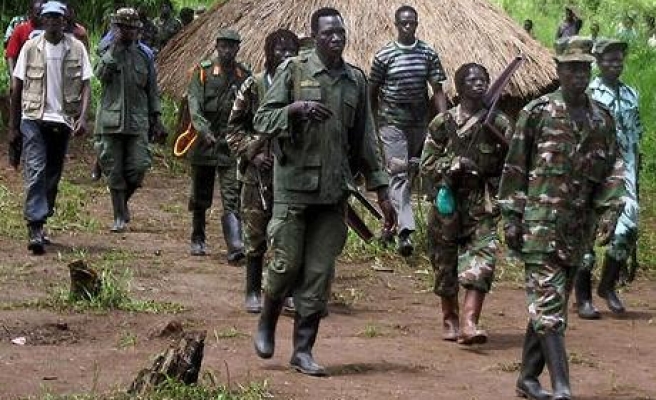 Uganda might reduce the number of troops it is contributing to an African taskforce stationed in the Central African Republic (CAR) and tasked with hunting down the rebel Lord's Resistance Army (LRA) due to a lack of funding.

"It is becoming increasingly very expensive to maintain the troops in that operation," Ugandan Chief of Defense Forces Gen. Katumba Wamala told Anadolu Agency in an interview.

"The lack of funding from external sources is a big challenge; sustaining troops that far is not cheap," he said.

"Because of the strain in our budget, we may see a further reduction of troops," Wamala said, declining to disclose how much Uganda was spending on the operation.

Kony, the group's leader, has been indicted by the International Criminal Court for war crimes.

Based in the region for 20 years, the LRA failed to win over local populations, however, who said the group didn't represent their collective grievances.

The LRA's first major foray into CAR was in March 2008, when it abducted dozens of people in a series of raids near Obo, capital of Haut Mbomou, one of CAR's 14 prefectures.

The group is currently believed to have split into several highly mobile sub-groups, operating with a significant degree of autonomy in both CAR and the Democratic Republic of Congo (DRC).

Wamala said Uganda was committed to helping in the fight against the LRA, which, he asserted, had become a regional problem, despite already contributing troops in Somalia and South Sudan.

"We don't have any interests in CAR other than Kony," he explained. "We don’t share a border."

"If it was not for the moral factor we would have said let Kony stay there and continue butchering the CAR people, but there is a moral consideration," added the top general.

"We feel it is morally not right to abandon those communities if anything CAR doesn’t even have a force to talk about which would address the issue," he said.

"[But] if nobody is going to help us foot the bill, we may find ourselves against the wall and… disengage because of the strenuous situation," Wamala said.

In March, the E.U. released 1.9 million euros to support the Regional Task Force and the Office of the African Union Special Envoy for the LRA.

Washington also sent about 100 combat-equipped Special Forces personnel, deployed as field advisors to the African force, which has a presence in Obbo in CAR, Ddungu in the DRC and Nzara in South Sudan.

The Ugandan general, however, remains dissatisfied with these contributions.

"They only bring some parts. They are not bringing the bulk of the logistics," Wamala said.

He noted that the deployment of South Sudanese forces in areas close to CAR had deterred the LRA rebels.

But the ongoing violence in South Sudan, he added, could serve to change the equation.

"If it [South Sudan] is compelled to remove the forces [from areas near CAR] because of events unfolding in the country, then it will definitely create a vacuum which will be taken advantage of by the LRA," he said.

South Sudan has been shaken by violence since last December, when President Salva Kiir accused sacked vice president Riek Machar of leading a failed coup attempt against his regime.

The conflict has already claimed more than 10,000 lives, with the U.N. estimating that around 1 million South Sudanese have been displaced as a result of the violence.

Earlier this month, the two sides signed a peace deal in Addis Ababa that calls for the formation of a new government and the drafting of a permanent constitution.