The landslides occurred early on Monday, engulfing the villages of Mabono and Meru near the border with Kenya, flattening hundreds of houses and killing entire families. 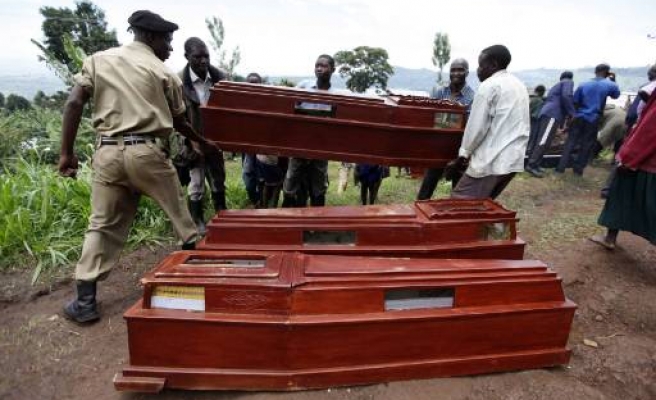 The death toll from devastating landslides in eastern Uganda rose to 30 on Tuesday as bodies were retrieved from piles of sludge and rock, and officials warned that unseasonably heavy rains could cause more mudslides and floods.

The landslides occurred early on Monday, engulfing the villages of Mabono and Meru near the border with Kenya, flattening hundreds of houses and killing entire families.

"There were stones falling from mountains and ... and they sounded like gunshots," said survivor Menjezi Silver. "We started to rescue some people who were buried inside the house."

"We have now confirmed 30 people dead and have retrieved 27 bodies already. The other bodies were probably washed down the hillsides by the intense floods," Musa Ecweru, junior minister for disaster preparedness, told Reuters.

"Today, the government will buy coffins for all the dead and hand them over to their relatives for burial and in cases where an entire family was killed, clans will receive the bodies and take care of burial."

Ecweru said teams of rescue workers had been deployed to locate survivors and move those at higher risk to lower ground until they could be permanently resettled in safer areas.

"The rains are intensifying and we expect more landslides in most of the districts in mountainous areas and we also expect floods in most of the low-lying areas," he said.

An unseasonable weather pattern has unleashed punishing rains over much of the east African country in the last three months, punctuated by hailstorms and deadly lightning strikes.

Crops have been destroyed in several areas and the government has warned that famine could follow failed harvests. The Horn of Africa region is already experiencing its worst drought in decades.

Illegal human settlement has flattened out most of the mountainsides in eastern Uganda, making the region vulnerable to occasional deadly landslides. Scores of Ugandans were killed in a similar disaster in March last year.