Earlier this month, the state-run New Vision newspaper reported that an audit had been carried out at the Uganda Wildlife Authority that had revealed the loss of the ivory. 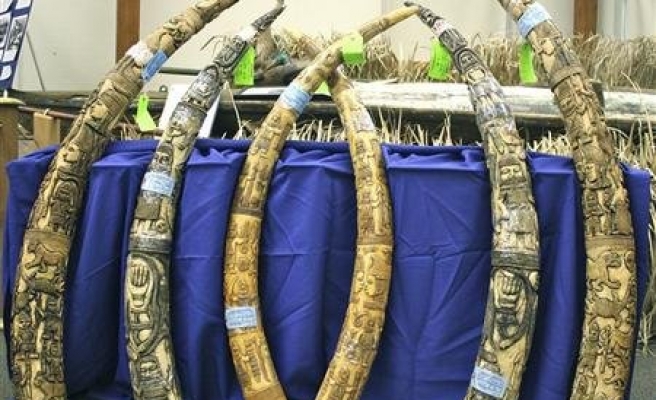 A government inspector said Friday that her office planned to investigate police and army personnel over the recent disappearance of 1,355kg of ivory – estimated to be worth some $1.1 million – from the country's wildlife authority.

"When you are investigating the loss of this ivory, you will investigate the people in the Uganda Wildlife Authority who are responsible for that store [of ivory]," Inspector-General of Government Irene Mulyagonja told reporters at her Kampala office.

"We are meant to understand there are some people from the Uganda police who are involved in looking after the ivory, and in the past there was also the Uganda People's Defense Force," she said.

Earlier this month, the state-run New Vision newspaper reported that an audit had been carried out at the Uganda Wildlife Authority that had revealed the loss of the ivory.

The authority's board of trustees then suspended five staffers from the law enforcement department over the matter.

President Yoweri Museveni then wrote to Mulyagonja asking her to step in and investigate the affair.

Mulyagonja told reporters that officials at her office had felt that they did not have adequate resources to conduct the investigation and would therefore withdraw.

"But just before we did so, we received instructions from the president requesting that we do step into this matter," said Mulyagonja.

"We are liaising with the police to inform them that we have a complaint and we also have an instruction from the president [to probe the matter]," she added.

The office will assemble a team, she said, after which "we are going to start on the investigations."

Mulyagonja assured the public that her team would exert its utmost efforts to get to the bottom of the case of the missing ivory.

"You may even find that the amount of ivory they are talking about may not be the only ivory that has been lost," she said.

"In fact, the complaint we got also had something to do with sales of pangolin [an endangered species of mammal] – it was not just ivory," she added.

Mulyagonja did not, however, provide a timeframe for the investigation, saying this would depend on what investigators found in the field.

Speaking to The Anadolu Agency, police spokesperson Fred Enanga said that, as partners in the investigation, the police had a duty to give an account of their actions.

"If there is anything that happened in the course of our daily routine, then we should come out and explain it," he said.

"All she [Mulyagonja] needs to do is name the officers she requires [to question] and make a request, either to the inspector-general of police or the director of administration in connection with this matter and they will be availed so that they can explain their role," Enanga added.

The developments came amid media reports that the Uganda Wildlife Authority's board of trustees had directed Andrew Seguya, the authority's executive director, to step aside to make way for the investigations.

Yet he dismissed these reports to AA.

"For me, I'm not suspended; I am in office and on duty. These media houses just have their own agenda," he said.

Addressing the suspensions at the wildlife authority, Mulyagonja said her office had to go ahead with the investigation, obtain relevant documents and visit sites where the alleged wrongdoing occurred before making any judgment.

"We shall start calling witnesses… If there is a need to suspend someone or interdict them, it would be after the preliminary findings," she said.

"If we look at the preliminary facts surrounding the case and discover that we must have him [Seguya] removed, then we shall also take action to see that he is removed," she added.

"I agree with her," he said. "You must follow a process – you don't just suspend [people]."