Uganda's Lord's Resistance Army rebels have abducted 697 people in central Africa in the last 18 months, according to a human rights group probe. 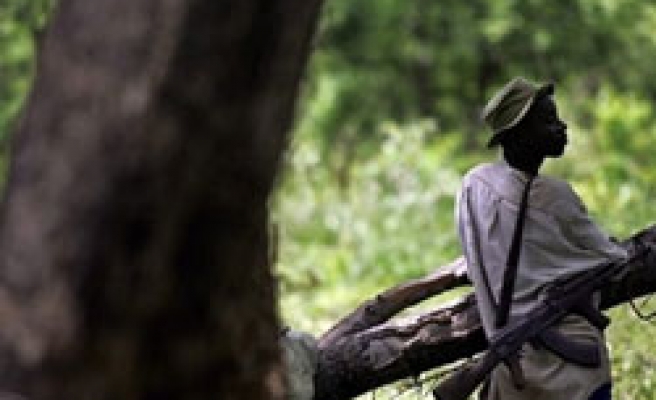 Uganda's Lord's Resistance Army rebels have abducted 697 people in central Africa in the last 18 months, killing many of them, according to a human rights group investigation, despite assurances from the Democratic Republic of Congo's army that the problem is abating.

"The LRA has killed at least 255 adults and children, often by crushing their skulls with clubs," said a statement from Human Rights Watch, whose researchers spent a month gathering evidence on attacks in Central African Republic and Congo. "Nearly one third of those abducted have been children, many of whom are being forced to serve as soldiers or are being used for sex by the group's fighters," it added.

The group charted abuses by the rebels that include tying victims at the waist in long human chains, beating them with branches and machetes, forcing them into slave labour, and humiliating captives by making them dance for their freedom.

Those who cannot keep up with the pace of swampy bush treks are clubbed to death and many captured children as young as 10 are armed and forced to kill other children with clubs, said the statement.

"Failing in our mandate"

The group said these attacks have had a "devastating impact" on communities, forcing up to 74,000 people to flee territories in southeastern C.A.R. and neighbouring northeastern Congo.

Another campaign group, Enough, said on Wednesday the LRA had attacked the northeastern Bas Uele territory 51 times in the past 15 months, bringing Congo's death toll at the hands of the LRA to 2,500 since 2008.

The Human Rights Watch findings underlined the scale of the catastrophe that the United States is seeking to tackle with new legislation that requires it to develop a strategy to bring to justice Joseph Kony's LRA sect, which has relied on mysticism and violence in its fight against Uganda over 23 years.

Several efforts to capture Kony, who is wanted by the International Criminal Court, have failed. In 2006, eight Guatemalan special forces working with the U.N. mission were killed in a raid on the LRA, while joint operations between Sudan, Uganda and Congo also failed in 2008, forcing the LRA to spread out across the region.

"The threat is proportionately much greater than anything from FDLR and ADF," a U.N. source told Reuters, referring to two active rebel groups in the east of Congo.

Congo says the situation has improved, however.

"In reality the problem is no longer one of military defence ... but public safety," General Didier Etumba, head of Congo's national army, told Radio Okapi at the end of July.

The United Nations peacekeeping mission in Congo, MONUSCO, is supporting Congo's operations against the FDLR but has closed its base in Bas Uele in the past month as part of a troop drawdown requested by the government.

Helicopters, essential for covering the remote terrain, are also in short supply.

"We simply do not have enough troops dedicated to that area," a U.N. source told Reuters. "There's a certain amount of inertia and we are failing in our mandate," the source added, saying MONUSCO had failed to open two new promised bases.

"The protection of civilians under LRA attack across central Africa is woefully inadequate," said Anneke Van Woudenberg, senior Africa researcher at HRW who conducted the research.

A MONUSCO spokesman said he would respond later.