Opposition parties, including the FDC and other civil society organizations, have mobilized in recent months to demand free elections and reform of the country's electoral commission. 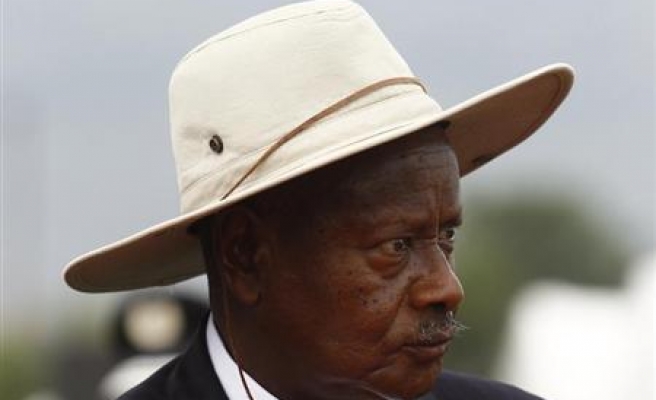 The leader of Uganda's main opposition party, the Forum for Democratic Change (FDC), on Friday stressed the need for "regime change" in the country – ruled by President Yoweri Museveni for the last 28 years – while reaffirming his party's readiness to take the helm.

"We have embarked on… mobilizing and organizing our party in readiness to work with other democracy-seeking entities in this country," FDC chief Mugisha Muntu told party members at the Fifth National Delegates Conference in Kampala.

"We need to change this regime and radically change [Uganda's] political direction," he added.

Speaking to The Anadolu Agency, Muntu said he wanted to lead his party to remove Museveni's ruling National Resistance Movement Party from power.

"We are going to position the FDC as a credible alternative political force that the citizens can trust – not only to change the rotten regime, but to take the country back onto track of a democratically governed and fast developing nation," he told AA after delivering his keynote speech.

He went on to slam Museveni, saying the long-serving president had brought Uganda to its knees.

"Corruption stinks to high heaven, the judiciary is compromised, and parliament is just a shadow of what a true parliament should be," Muntu said.

He said the national health sector was in a state of deterioration, with buildings but no drugs and unmotivated health workers.

Equally, he said, the education system had failed in terms of intellectual growth; agriculture, the backbone of Uganda, was still struggling, with peasants opting for subsistence farming; and unemployment rates continued to rise.

"This is why we must double our efforts to organize regime change, but also organize ourselves to effectively meet these challenges head-on from the first day we get to power," he told AA.

"We cannot afford to get into government and start thinking about what to do at the expense of suffering Ugandans. We must start offering solutions from the day we start exercising power," Muntu asserted.

With around 800 party delegates attending the conference, FDC Secretary-General Alice Alaso explained to AA that the process of preparing the party for 2016 elections hinged on the event.

"This conference is going to give [party] members the mandate today to go set up their committees, which will protect the votes, campaign for the party, and mobilize resources for the 2016 general elections," he said.

The party will hold another National Delegates Conference in February of next year where it will elect its flag-bearer.

Opposition parties, including the FDC and other civil society organizations, have mobilized in recent months to demand free elections and reform of the country's electoral commission.

Alaso said that opposition parties were hopeful that these demands would be met and that she was helping prepare her party in anticipation of the changes.

"It's common knowledge that Ugandan elections have never been free and fair," she said. "[But] what if tomorrow morning they allow in constitutional amendments and there is a new electoral commission?"

"I wouldn't have time to build the party," she added. "The day we are given a level playing ground, you will judge us from there."

Despite the optimism that prevailed at the conference, Osege Angelline, the party's treasurer-general, told FDC members that the party was still struggling financially.

"It is an undeniable fact that we're facing financial challenges. Every organization needs resources to sustain and expand its operations, and the FDC is no exception," she told attendees.

According to Angelline, the FDC is currently struggling to build its party structure – for which it needs 5.66 billion Ugandan shillings (around $2 million) – and is calling on members to finance the party's activities.

"We have a duty and responsibility to help our party grow," she asserted.

The party's main sources of income currently include contributions from legislators and party members, donations, loans and grants.

However, Alaso told AA that the reason party finances had dwindled was because the Democratic Governance Facility, a multi-donor group that supports democracy initiatives in Uganda, recently reduced its support for the party.

The party, therefore, is now looking to local sources of funding.

"We are mobilizing. But we are also assured of support from the political capacity-strengthening project [set by donor organizations], which goes to all the country's political parties," Alaso said.

She also expressed hope that parliament would push for more funding for political parties and that FDC members would continue providing the party with monthly remittances.

The FDC currently has 36 legislators in parliament, compared to 261 for the ruling NRM.

The assembly is made up of 385 MPs, including ten ex-officio members and ten army representatives. The remaining 68 seats are shared between three smaller opposition parties.