The LRA is mainly comprised of poor people from Northern Uganda's Acholi tribe, most of whom were abducted at young ages before being turned into fighters. 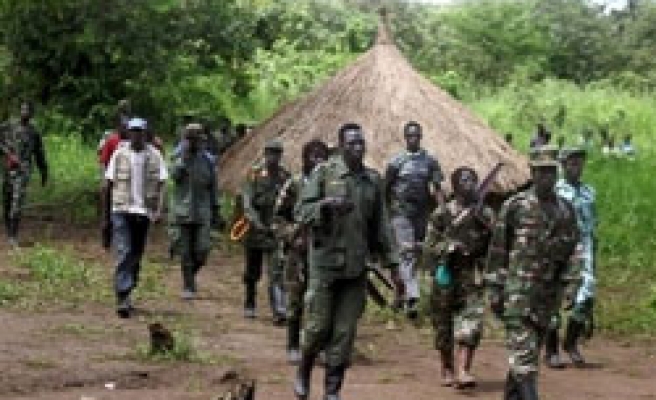 Uganda's rebel Lord's Resistance Army (LRA) is reportedly in "its weakest state" since 2008, having lost dozens of fighters in battles with Ugandan troops in 2013, according to an international organization dedicated to raising awareness about LRA crimes.

"The LRA continues to lose its Acholi fighters, and they're not replacing them with any new members," Sean Poole, the regional Counter-LRA Programs Manager at Invisible Children, told Anadolu Agency in an interview.

The LRA is mainly comprised of poor people from Northern Uganda's Acholi tribe, most of whom were abducted at young ages before being turned into fighters.

"Their ability to operate has been cut down because all that are left are in the command structure," Poole explained.

According to Invisible Children's LRA Crisis Tracker report for 2013, 16 LRA combatants defected from the rebel outfit while another 16 – including four senior officers – were confirmed captured or killed.

Ugandan troops operating under the African Union Regional Task Force have reportedly captured or killed as many as eight additional fighters.

In total, the LRA lost between 32 and 40 of its estimated 200 officers and fighters that had been in its ranks at the beginning of 2013. Currently the LRA rebel outfit is expected to have between 160-168 soldiers.
Poole added that 62 women and children who had spent at least six months in LRA captivity had returned home in 2013.

"These women and children were a significant portion of the experienced laborers that senior LRA commanders rely on to sustain day-to-day life in the bush," he explained.

According to the LRA Crisis Tracker report, about 73 percent of the captive women and children had either escaped with defecting combatants or were released by LRA fighters.

These included 28 women and children released at one time in March of last year.

The LRA took up arms in 1986 after Ugandan President Yoweri Museveni took power, claiming the communities of Northern Uganda were being marginalized.

Based in northern Uganda for 20 years, the LRA failed to win support from locals, who said the group did not represent their legitimate grievances.

The LRA's first major foray into the Central African Republic (CAR) was in March 2008, when it abducted dozens of people in a series of raids near Obo, capital of Haut Mbomou, one of CAR's 14 prefectures.

The LRA has been blamed for abducting, killing and displacing civilians across East and Central Africa.

Despite the LRA's recent setbacks, however, Invisible Children warned that the group was still able to undermine regional stability.

"This [recent] loss, however, doesn't mean they do not continue destabilizing and causing insecurity," Poole said.

"Right now, the LRA are in survival mode," he added. "The top commanders left are there to protect [group leader] Joseph Kony and a few of his commanders from international justice."

Kony is wanted by the International Criminal Court in The Hague for crimes against humanity.

"Kony is taking advantage of instability in South Sudan and the Central African Republic," Poole asserted.

This, Poole says, is because most communities in CAR lack viable protection from the central government.

In recent years, LRA commanders also established a network of safe havens across the region, including semi-permanent camps in the Democratic Republic of Congo from which they illegally poach elephants.

Rebel commanders allegedly smuggle ivory through the Kafia Kingi, a mineral-rich enclave on the border between Sudan and South Sudan.