Some 3.7 million Somalis -- almost half of the population -- are going hungry with drought hitting some 11.6 million people across Kenya, Somalia and Ethiopia. 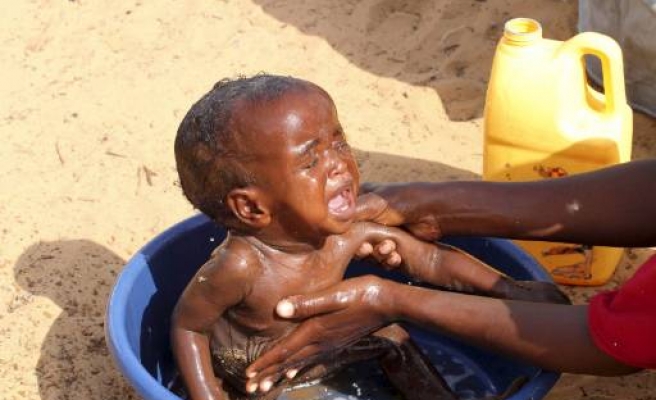 The United Nations airlifted emergency food for starving children into the Somali capital Mogadishu on Wednesday as aid groups warned of a growing influx of hungry families from the famine-hit south of the country.

Some 3.7 million Somalis -- almost half of the population -- are going hungry with drought hitting some 11.6 million people across what local media have dubbed a "triangle of death" straddling Kenya, Somalia and Ethiopia.

Though the U.N. food agency had already distributed food in the capital, this is its first airlift of food into Somalia since the food crisis began.

"We need to scale up our programmes, and especially the nutrition programmes, in order to avoid children falling into severe malnutrition," Stephanie Savariaud, a U.N. World Food Programme (WFP) spokeswoman, told Reuters.

"Then they need to get hospitalised and it's much more difficult to save them."

The U.N. plane carried 10 tonnes of so-called therapeutic food -- the type used to feed malnourished children under five. The shipment will feed 3,500 children for a month, WFP said.

The agency said it has an additional 70 tonnes ready in Kenya, which it will fly to Somalia over the coming days.

Aid agencies say they cannot reach more than two million Somalis facing starvation in the parts of the country where insurgents control much of the worst-hit areas.

WFP officials have said they will try to deliver food to the areas controlled by the al Shabaab fighters over the next week and that they will consider food drops from aircrafts as a last resort.

There are about 400,000 displaced people in the capital Mogadishu, with about 1,000 new arrivals each day, the U.N.'s refugee agency (UNHCR) said in a statement on Tuesday. It estimated that 100,000 internally displaced people have arrived in the city over the last two months.

People in makeshift settlements are fighting over food being distributed by local charities, with the weaker ones unable to push through the crowds to get it, UNHCR said.

"Even if people are able to obtain the food and water being distributed, they often lack even the most basic containers to carry it. Often, they must haul food and water in plastic bags," UNHCR said.

The WFP has set up 16 feeding centres across the capital, providing hot meals to new arrivals using supplies delivered by sea from Kenya and Tanzania.

Boats are continuing to shift food in but they can take months to arrive. They are escorted by the European Naval Force to Somalia to deter pirate attacks.