Ban has previously warned that he is gravely concerned the violence could spiral into genocide and that a "de facto partition" of the country was setting in. 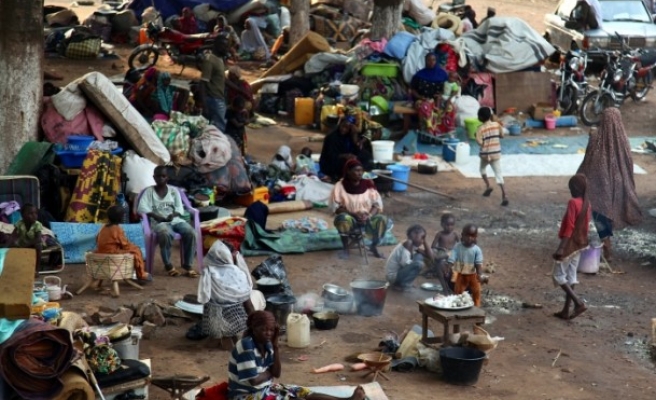 The United Nations on Monday proposed a nearly 12,000-strong peacekeeping force for conflict-ravaged Central African Republic that would have a "robust mandate" and initially focus on protecting civilians.

The recommendation was included in a report from U.N. Secretary-General Ban Ki-moon to the 15-nation Security Council.

Ban has previously warned that he is gravely concerned the violence could spiral into genocide and that a "de facto partition" of the country was setting in. At least 2,000 people have been killed and more than 700,000 displaced since December.

"The key focus of the United Nations mission, in the initial stage must be the protection of civilians," Ban said in his report. "More troops are needed in the Central African Republic to address the situation in the initial phase of the peacekeeping operation."

"It is envisaged that the strength of the peacekeeping operation would comprise up to 10,000 troops and 1,820 police personnel," the report said.

The European Union is already deploying 1,000 soldiers to join 6,000 African and 2,000 French troops, who have struggled to stop the fighting sparked when Christian militas started killing Muslims.

Ban said a military response to the "current situation of violence and impunity" would be insufficient, which is why he called for a large number of U.N. police.

"The proposed concept of operations has been developed on the assumption that the force is deployed with a robust mandate and adequate resources," he said.

U.N. officials and diplomats say that the force would include many, if not all, of the African Union troops already deployed to the impoverished, land-locked country.

The proposed U.N. peacekeeping force, which will need Security Council approval, would not be up and running before the end of the summer, they say.

"It will take the United Nations approximately six months to prepare the deployment of its operation," Ban's report said.

It added that the transfer of authority from the African Union to the United Nations peacekeeping force should ideally take place by Sept. 15.

Thousands of Muslims have fled northeast from the capital towards the border with Chad, creating the de facto division of the country which Ban spoke about, and which the U.N. human rights chief described as "ethnic-religious cleansing."

France, Security Council diplomats say, will likely support Ban's recommendations. The United States and Britain are expected to be less enthusiastic, the diplomats say, because of the relatively high cost of such an operation.

Even though it will not send troops to Central African Republic, the United States pays more than a quarter of the U.N. peacekeeping budget. Britain is also a major contributor. Such a U.N. operation, if approved by the Security Council, would require legislative approval in the United States and Britain.

Diplomats and U.N. officials say that Ban's recommendations are based on an assessment of the minimum necessary resources to stabilize the situation and stop the killings.

Rich in diamonds, timber, gold, uranium and even oil, Central African Republic has been racked by five coups and numerous rebellions since independence from France in 1960 as different groups fought for control of state resources.

That, along with spillover from conflicts in neighboring Democratic Republic of Congo, Sudan and Chad, have destroyed the rule of law, leaving a phantom state with an ill-disciplined army, corrupt administration and a lawless interior.