The 1991 ceasefire settlement was brokered by the United Nations with the understanding that a referendum would be held on the territory's fate. But the referendum, which MINURSO was deployed to help organize, never took place 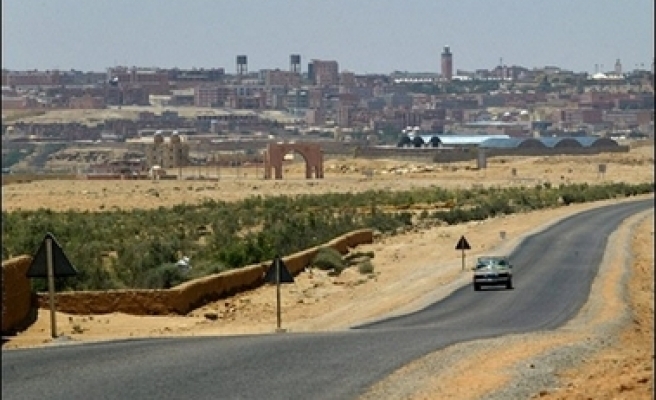 The U.N. Security Council renewed a U.N. peacekeeping mission in the disputed North African territory of Western Sahara for another year on Tuesday, and urged all sides to respect human rights, but it did not call for the United Nations to monitor abuses as rights groups have advocated.

U.N. Secretary-General Ban Ki-moon, like the rights advocacy groups, has called for the U.N. peacekeeping mission, known as MINURSO, to monitor and report on human rights abuses in the territory, but backed by France, Morocco rejects the idea.

Morocco took control of most of the territory in 1975 when colonial power Spain withdrew, prompting the Polisario Front independence movement to wage a guerrilla war that lasted until 1991, when the U.N. brokered a ceasefire and sent in MINURSO.

Tuesday's unanimously adopted resolution had the U.N. Security Council "stressing the importance of improving the human rights situation in Western Sahara and the Tindouf camps, and encouraging the parties to work with the international community to develop and implement independent and credible measures to ensure full respect for human rights."

Earlier this month, Ban renewed his appeals for sustained human rights monitoring in Western Sahara and warned against unfair exploitation of the region's natural resources.

However, the U.S.-drafted resolution, which council diplomats said was painstakingly negotiated with Morocco, did not heed Ban's appeal.

"Truth: for years France has enabled Morocco's counterproductive allergy to U.N. rights monitoring," HRW's U.N. Director Philippe Bolopion wrote to French envoy Gerard Araud on Twitter. Araud rejected the allegation, saying on Twitter: "Morocco able to defend its interests and the U.S. able to make proposals when wanting to. No need of France."

Araud has repeatedly denied threatening to use France's veto to block a U.N. rights mechanism for Western Sahara, but two council diplomats told Reuters earlier this month they believed that Paris would be ready to use its veto in support of Morocco.

Last year the United States initially proposed that MINURSO take on the job of rights monitoring. But Morocco was furious and Washington dropped the idea. As a compromise, Rabat agreed to allow some U.N. rights investigators to visit the territory.

This year, however, Washington did not renew the proposal.

French officials say they do not oppose rights monitoring, but argue that such a change would lead to MINURSO's expulsion.

Morocco's new U.N. Ambassador Omar Hilale told reporters that Ban's latest report on Western Sahara had indeed placed the future of MINURSO in jeopardy. He also said there was "no need for any kind of mechanism" for monitoring human rights.

Polisario's U.N. representative Ahmed Boukhari welcomed the Security Council expression of support for a political solution to the Western Sahara conflict, but said "the Frente Polisario notes with regret that MINURSO is the only U.N. Peacekeeping Mission established since 1978 that does not have a mandate to monitor and report on the human rights situation on the ground."

But Hilale said some other U.N. missions also do not monitor rights.

Several council diplomats voiced dismay at the fact that the U.N. secretariat twice revised Ban's report on Western Sahara earlier this month within the space of several hours. The main change in the third and final version altered his call for a human rights "monitoring mechanism" to a call for "monitoring."

Boukhari accused both Morocco and France of pressuring the United Nations to revise the report. Araud denied the charge.

The 1991 ceasefire settlement was brokered by the United Nations with the understanding that a referendum would be held on the territory's fate. But the referendum, which MINURSO was deployed to help organize, never took place, and attempts to reach a lasting political deal have foundered.

The renewal of the mandate of the peacekeeping mission marks an annual battle in the Security Council between France, which defends Morocco's position, and a number of African countries and the Polisario. Algeria supports the Polisario.

Rabat wants Western Sahara to be an autonomous part of Morocco. Polisario instead wants to hold the long-promised referendum among the region's ethnic Sahrawis that would include the option of independence. There is no agreement between Morocco and Polisario on who should participate in a referendum.

Western Sahara is slightly bigger than Britain and has a population of under 500,000. It is rich in phosphates - used in fertilizer - and potentially, offshore oil and gas. Polisario has complained about Western firms searching for natural resources based on permits from Morocco.