A statement from Human Rights Watch said members of the Khamis Brigade, a force commanded by Muammar Gaddafi's son Khamis, appeared to have carried out the killings on Aug. 23. 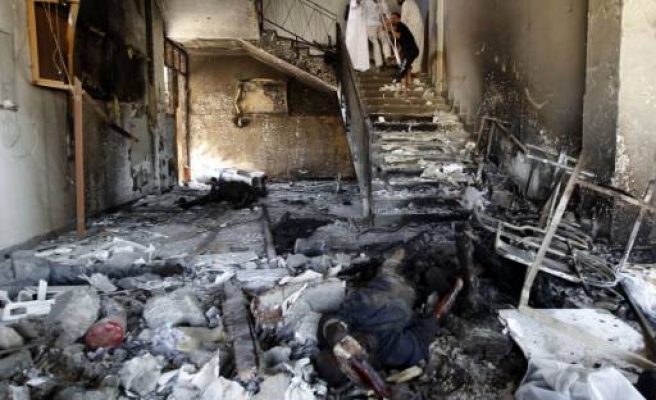 A military unit commanded by one of Muammar Gaddafi's sons appears to have been responsible for the summary execution of dozens of detainees in a warehouse near Tripoli last week, a human rights organisation said on Monday.

Three days later the warehouse, which had been used as a prison, was set on fire but the cause was unknown, Human Rights Watch said.

Since the fall of Gaddafi just over a week ago, evidence has emerged of numerous killings. Dozens of bodies, some from Gaddafi's troops and others of detainees held by the ousted government, have been discovered in the Libyan capital.

Human Rights Watch said it inspected the charred skeletal remains of about 45 bodies, still smouldering, on Saturday. The remains were spread throughout the warehouse in the Khalida Ferjan neighbourhood in Salahaddin, south of Tripoli, adjoining the Yarmouk military base.

At least two more corpses were lying outside, unburned.

A statement from Human Rights Watch said members of the Khamis Brigade, a force commanded by Muammar Gaddafi's son Khamis, appeared to have carried out the killings on Aug. 23.

"Sadly this is not the first gruesome report of what appears to be the summary execution of detainees in the final days of the Gaddafi government's control of Tripoli," said Sarah Leah Whitson, Middle East and North Africa director at Human Rights Watch.

"These merciless murders took place in the midst of Ramadan and those responsible should be brought to justice and punished."

Human Rights Watch said it had been told by a survivor that guards at the warehouse read out 153 names of detainees in the roll call on the day of the killings.

He estimated that 20 escaped and around 125 of the 153 detainees were civilians.

One building in the compound had spray-painted on it "32nd Brigade", which is part of the Khamis Brigades.

The survivor, Abdulrahim Ibrahim Bashir, 25, said at sunset on Aug. 23 guards of the Khamis Brigade opened fire on him and the other detainees from the roof, shooting through the roof's tin sheeting, while another guard threw grenades in from the entrance. He survived by escaping over a wall while the guards were reloading their weapons.

Bashir said Khamis Brigade members had held him in the warehouse for three months after accusing him of being "one of the revolutionaries".

Bashir told Human Rights Watch: "Four soldiers climbed on the top of the warehouse, and another soldier opened the door. They started shooting at us through the roof. It was made of sheet metal. The guy at the door was throwing in grenades.

"I saw bullets and heard people saying Allahu Akbar, and that's all. I saw (eight people) fall down. When (the guards) were refilling their ammunition, I ran out the door and jumped over the wall. I was not wounded ... They just shot and killed us. After I escaped, I saw one of the soldiers finish off anyone who was wounded lightly."

Bashir said one of those killed had died in his arms.

Human Rights Watch said it was told by a rebel fighter that he and his military unit had found the smouldering warehouse when they seized the Yarmouk military base on Aug. 26.

He was quoted as saying that as his unit entered the base around noon, they went looking around.