Up to six more Somalia regions may face famine: UN

The famine in the Horn of Africa is spreading and may soon engulf as many as six more regions of the nation of Somalia, the U.N. humanitarian aid chief said. 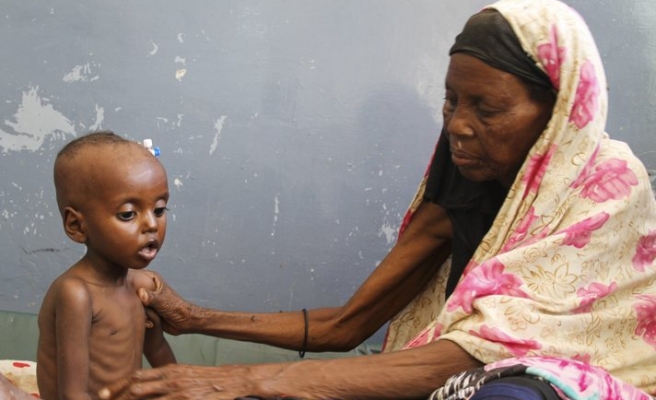 The famine in the Horn of Africa is spreading and may soon engulf as many as six more regions of the nation of Somalia, the U.N. humanitarian aid chief said on Monday.

Some "12.4 million people in Kenya, Ethiopia, Somalia and Djibouti are in dire need of help and the situation is getting worse," U.N. under-secretary-general and emergency relief coordinator Valerie Amos told reporters.

The United Nations declared a famine in two regions of southern Somalia -- where 3.7 million people are going hungry -- on July 20. There is always a steady trickle of Somalis coming into northern Kenya, mostly fleeing violence, but in recent months they have also been looking for food.

"Today we are warning that unless we see a massive increase in the response, the famine will spread to five or six more regions," she said.

"Tens of thousands of Somalis have already died and hundreds of thousands face starvation with consequences for the entire region."

Amos said the African Union would hold a funding conference with the assistance of the United Nations soon to help raise money for the drought-stricken region.

"Today we urgently need another $1.4 billion to save lives now," she said.

Amos said the drought was the worst in 60 years, based on the amount of rainfall, the number of people and countries affected, and the amount of livestock that has perished.

It was unclear whether the famine has spread to the Horn of Africa nation of Eritrea, Amos said.

The Eritrean government in Asmara has said the country has had rainfall and is not experiencing food shortages.

Amos said the United Nations had very little information from Asmara but had received some anecdotal evidence the country has been affected by the drought.

A recent U.N. report said the situation in the worst affected areas of Ethiopia and Kenya was expected to ease to crisis levels from mere emergency toward the end of this year.

But the deterioration in southern Somalia was likely given the very high levels of both severe malnutrition and under-five mortality in combination with worsening pastoral conditions, a continued increase in local cereal prices, and a below-average harvest.

The crisis was intensified, it said, by fighting in Somalia.