US air strike kills dozens at ISIL camp in Libya 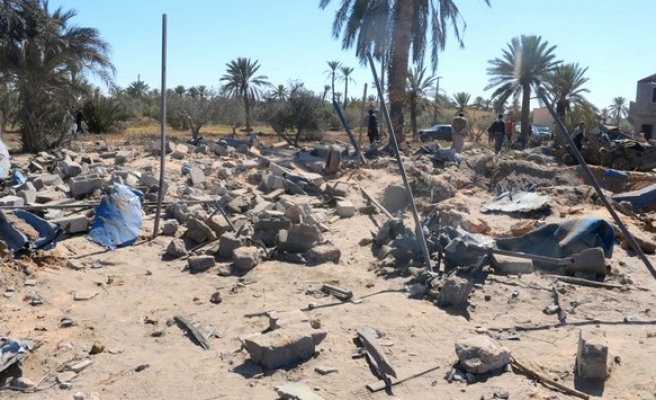 A US air strike on a training camp in Libya killed dozens of people Friday, probably including a senior ISIL group operative behind attacks in Tunisia, officials said.

Pentagon press secretary Peter Cook said Noureddine Chouchane, also known as "Sabir," and others had been planning attacks against American and other Western interests.

"We took this action against Sabir in the training camp after determining that both he and the ISIL fighters at these facilities were planning external attacks on US and other Western interests in the region," Cook said, without providing specifics.

"We see what's happening in Iraq and Syria and we believe that these fighters inLibya posed a threat to our national security interests."

It was the second US air raid in the violence-wracked North African country targeting the fast-expanding jihadist group in the past three months.

The strike early Friday near the city of Sabratha "likely killed" IS operative Chouchane, a US official said earlier.

Britain's defence ministry said the strike on the camp was carried out from a Royal Air Force base, RAF Lakenheath.

A jihadist safe house was destroyed in the dawn raid about 70 kilometres (42 miles) west of Tripoli, according to Hussein al-Dawadi, an official in Sabratha near the border with Tunisia.

"The latest toll shows that 49 people were killed," including up to three women, he told AFP.

"There are also five wounded, some of them are in critical condition."

"It looks like someone important was in the house, but we cannot confirm that for now," Dawadi added.

US State Department spokesman Mark Toner said that as ISIL came under pressure in Iraq and Syria it was seeking to establish itself elsewhere, and "Libya has been an area of concern for some time".

"As we have opportunities we're gonna carry out airstrikes against those ISIL elements that are operating in Libya," he said.

Tunisia's interior ministry issued a picture of Chouchane Friday and a statement saying that he was a "dangerous terrorist" and a wanted man.

The Sabratha Municipal Council's website said rifles, rocket-propelled grenades and other weapons were found in the house, which was rented by foreigners including Tunisians.

It posted pictures of mattresses and blankets among the rubble and a piece of metal bearing the inscription "Islamic State".

"We heard four big hits at around 3 am that shook our houses," resident Moussaab Kamouka said.

Chouchane is suspected of being behind an attack in July on a beach resort near the Tunisian city of Sousse that killed 38 tourists -- including 30 Britons.

He is also accused of involvement in an attack on the National Bardo Museum in Tunis in March that killed 21 tourists and a policeman.

Both assaults were claimed by ISIL which Washington is also targeting with air strikes in Syria and Iraq where the group has proclaimed an Islamic "caliphate" and committed widespread atrocities.

"Destruction of the camp and Chouchane's removal will eliminate an experienced facilitator and is expected to have an immediate impact on ISIL's ability to facilitate its activities in Libya, including recruiting new ISIL members, establishing bases in Libya, and potentially planning external attacks on US interests in the region," he said.

He said the strike showed the US will target IS "whenever it is necessary".

It was the first US strike against an ISIL leader in Libya, where the Pentagon estimates the jihadist group has about 5,000 fighters.

US President Barack Obama vowed Tuesday not to let ISIL build a base in Libya.

"We are working with our other coalition partners to make sure that, as we see opportunities to prevent ISIS from digging in in Libya, we take them," Obama said.

"We will continue to take actions where we got a clear operation and a clear target in mind."

IS has exploited the turmoil in Libya since the overthrow of dictator Moamer Kadhafi five years ago, raising fears that it is establishing a new stronghold on Europe's doorstep.

Last June, it captured the city of Sirte, 280 miles (450 kilometres) east of Tripoli, and has since attacked coastal oil facilities and staged a string of suicide bombings.

The internationally recognised government has been based in the country's far east, having fled a militia alliance including Islamists that overran the capital in August 2014.

The alliance has its own administration and parliament in the capital. The UN is pushing both sides to back a unity government to tackle jihadists and people-smugglers.