US and India have strengthened their ties in defence with a joint peacekeeping training programme before being deployed to Africa. 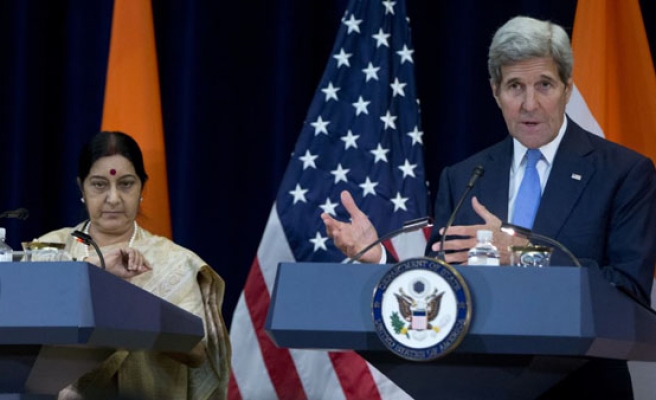 The United States and India agreed on Tuesday to train troops in six African countries before they are deployed to U.N. peacekeeping missions, U.S. Secretary of State John Kerry said.

He spoke after meetings with his Indian counterpart, Shushma Swaraj, on economic and security ties, which have been growing between their two countries given shared concerns about China's rise in Asia.

"This responds to a growing need for effective, professional, international peacekeeping in regions of conflict," he said at the end of a two-day U.S.-India Strategic and Commercial Dialogue.

He also cited progress on energy security and climate change. India is the world's third-largest carbon emitter despite its low per-capital emissions, giving it a crucial role in U.N. climate talks in Paris in December.

"Both of our governments are firmly committed to reaching a truly meaningful, truly comprehensive, and truly ambitious climate agreement in Paris later this year," Kerry said. "That is absolutely critical."

He said the United States was launching a Fulbright climate fellowship program to help with the exchange of research information. Swaraj said India recognized that climate change is "one of the most pressing challenges of our times."

Modi's meeting with Obama will be his third in a year and reflects shared concerns about an increasingly assertive China as well as a desire to boost commercial ties.

Kerry, Swaraj and Japanese Foreign Minister Fumio Kishida will also would hold a first trilateral meeting at ministerial level during the U.N. session next week to "coordinate policies among our three great democracies," Kerry said.

This week, Modi is due to visit technology companies in Silicon Valley and also travel to New York.