US rules out coalition to stop ISIL in Libya

As the North African state sees a 'metastasizing' of the terror group, the US remains cautious about next steps 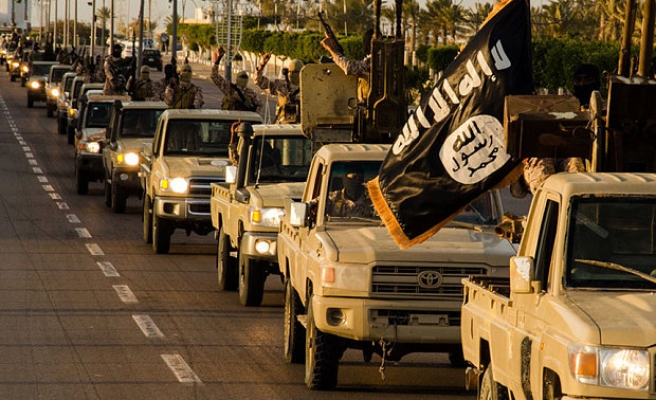 The U.S. has no appetite to lead an intervention in Libya despite the country becoming a foothold for ISIL thanks to long-lasting political turmoil.

Last week’s strike on a ISIL-operated training camp in the war-torn country has re-ignited debates around a potential role for Washington to play in Libya.

However, U.S. officials do not anticipate an international coalition under the leadership of the U.S. which would intervene in Libya to curb the militant group’s influence in the deserts of West Africa.

The U.S. is going to hunt ISIL leaders and operatives wherever they are, a Pentagon official told Anadolu Agency but added that there is no U.S.-led coalition option on table right now.

“There are a lot of countries that are interested, not in a coalition per se but about what is happening there,” said Lt. Col. Michelle Baldanza, a Pentagon spokesperson.

Due to geographical proximity Libya constitutes a more direct threat to Europe because any major refugee influx caused by ISIL will directly affect countries like Italy, Spain and Greece.

The Pentagon’s comments come amid a sense of urgency among U.S. officials that ISIL is “metastasizing” across the Middle East and North Africa.

According to the Pentagon, there are up to 3,000 ISIL militants in Libya – a number which is likely to increase.

Col. Muammar Gaddafi’s hometown of Sirte is reportedly under ISIL control and some believe the militant group is trying to turn it into a center of operations, like Raqqa in Syria and Mosul in Iraq.

“Libya has become a magnet for individuals not only inside of Libya, but from the African continent as well as from outside,” CIA Director John O. Brennan told a U.S. Senate panel earlier this month.

Brett McGurk, the presidential envoy to the U.S.-led coalition fighting ISIL, also told lawmakers this month that the terror network is “trying to establish a statewide structure” in Libya.

Using the metaphor of cancer for ISIL, Secretary of Defense Ash Carter has been saying that the main focus will be “the parent tumors” in Syria and Iraq but the U.S. would not allow ISIL to "sink roots" in Libya as well.

However, although ISIL has complicated the problem in Libya from when a 2011 uprising against Gaddafi ended up in a UN-NATO intervention, the current U.S. reluctance to lead European powers in Libya does not seem to change.

In 2011, the U.S. let France take the lead in Libya and Washington still wants Europe to heal the chaos which has unfolded since then.

Recently responding to questions about a military campaign in Libya, Carter underscored that Italy is leading efforts in Libya and that the U.S. would play a support role.

The Pentagon has proposed spending $200 million this year to help train and equip the armies and security forces of North and West African countries.

Late last month, Pentagon spokesman Peter Cook told reporters that U.S. Special Forces, alongside British troops, are on the ground in Libya to monitor ISIL’s presence and movements in the country but he declined to speak on any contingencies there.

As the deliberations rage as how to best handle the rise of ISIL in Libya it is also no secret that an intervention there, very like in Syria, will require a larger goal than just going after ISIL.

According to Washington-based Atlantic Council expert Karim Mezran, the rise of ISIL in Libya is inevitable as long as political turmoil continues.

Mezran cautioned that any intervention that has “the destruction of ISIL as its singular goal” will fail.

“ISIL is a symptom and not a cause of the problem,” he said noting that the cause of the chaos in Libya is the political rivalry between the governments in Tripoli and Tobruk.

“If you want to defeat the terrorists in Libya you have to solve the crisis of the Libyan state and bring back order and stability,” says Mezran. “Foreign intervention that has restoring stability as its goal may be well received by the Libyan people.”

Despite several attempts by the UN to facilitate reconciliation in the country, warring factions are yet to agree on a unity government.

Libyan people have been suffering from a lack of security due to the emergence of various actors.

The lack of a central government has led many people to take up arms, bringing the country to the brink of a collapse.

Libya's internationally backed parliament postponed a vote on the new government until Feb. 22 but this attempt failed as the assembly lacked a quorum – forcing a further postponement.