He told AA the nomination is not only good for the image of Uganda, but of Africa as a whole 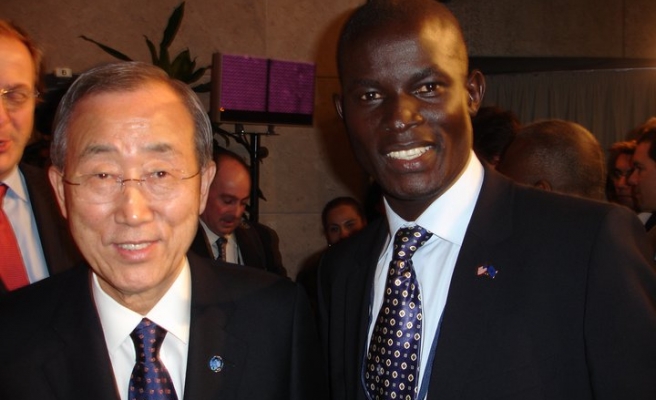 World Bulletin / News Desk
Like many children in his community, Victor Ochen grew up without enough food or clothes and had to share one bed sheet with his three brothers on cold nights.

His personal suffering inspired a long journey of advocating for the rights of war victims that recently landed him a nomination for the prestigious Nobel peace prize – a first for Uganda.

"Our mother never ate; she would prepare food and pretend she had eaten. But she wanted to keep the food for us," Ochen told The Anadolu Agency in an exclusive interview.

There was never enough food and the family had to survive on one meal a day for years.

"But we could see that she [their mother] was losing weight," recalled Ochen, now 33 years old.

He recalled that, in 1996, at the peak of the Lord's Resistance Army (LRA) insurgency, his mother had contracted malaria.

Fearing possible abduction by the notorious militants, the family could not move the sick mother from Abia village in Northern Uganda's Lira district to the nearest hospital.

Instead, one of the children had to take the risk of sneaking through the bush to reach the hospital.

"The hospital asked him for money and we had none, [so] he returned," Ochen recalled bitterly.

The family kept trying to get much-need medicine amid several abduction attempts and landmine explosions, until their mother eventually succumbed to her illness.

The eighth of ten siblings, the burden of taking care of the family following their mother's death fell squarely on Ochen.

"Her death is one of my inspirations," he said, remembering how he had promised his mother that he would never join the ranks of the militants.

"You were either abducted by the rebels or you joined the local home guards," Ochen recalled. "As much as we suffered, I chose peace."

Ochen kept true to his word, and for years has been advocating for the rights of war victims.

On Feb. 7, he received a call from the American Friends Service Committee, an NGO that promotes peace and justice and was a co-recipient of the of the 1947 Nobel Peace Prize.

The NGO told him that he had been nominated for the 2015 Nobel Peace Prize for his humanitarian work.

"I was surprised that I would be chosen for the most prestigious award in the world; I was humbled," Ochen told AA.

"I even wondered if they meant me," he said, still shaking his head in disbelief.

He has been nominated along with his organization, the African Youth Initiative Network.

Ochen struggled with his early education.

He only finished primary one when cattle rustlers attacked their village and the family was forced to seek shelter in a refugee camp in Lira town.

"We spent four years there; this was very frustrating for me," Ochen recalled.

At one point, he discussed resuming school with his mother.

"I joined primary five and performed so poorly that year," he said. "I was the second worst student in my class, but only because the worst student did not sit for exams."

But when the time came for the final school term, he "crammed everything I was taught and got the highest marks, which made me the best in class."

Ochen went on to finish the primary stage at the head of his class and join Lira Town College in 1997.

"Life was so hard. I had to cut shea nut trees and burn them for charcoal to pay my school fees and fend for the family," he recalled.

"I'm happy that my effort burning charcoal paid off; today, I can speak English," he added, smiling.

Ochen did all sorts of odd jobs to earn money.

He started working as a cleaner at a local radio station and later as a receptionist and a technician.

He would sleep at the radio station in order to switch on the radio transmitter early in the morning.

"I went on to play music and also presented, and this earned me $5," Ochen said. "But there were times the money didn't come, and if it did, I was already in debt."

He also worked as a cobbler – even though he never owned his own pair of shoes.

"I would even skip class to mend shoes. For the first time, I earned $3 and bought my shoes on a Saturday and polished them," Ochen said.

"But they were stolen on Sunday," he recalled bitterly.

"I had to ride long distances on a bicycle in order to sell fish. Three months later I bought my first mattress," Ochen said.

On the day Ochen applied to join Gulu University, his father called and said he needed him to return home.

When he asked for the reason, his father said: "Today we have not been able to raise drinking water, forget about food or firewood."

"I cried the whole night," said Ochen. "But in the morning, I picked up my mattress and bag and went back home to Lira."

He later applied for a job with Straight Talk Foundation Uganda – which he got one year later – and enrolled for a weekend diploma program at Kampala's World University for Leadership.

In December of 2003, Ochen's brother was abducted by LRA rebels from the family's grass-thatched house.

"I never heard from him until today," Ochen told AA.

In 2007, while presenting a radio show, a returnee came and asked Ochen if he had a brother who had been abducted.

"He told me that one day they were listening to my voice on the radio and my brother was crying," Ochen said tearfully.

The returnee told him the incident had happened in 2006 before the LRA site had been bombed by the Ugandan army and many of the abductees had to flee.

Ochen, who had promised his dying mother he would never hold a gun, formed a "peace club" to cater to children who used to take an active role in the armed forces.

"Most importantly, I wanted to challenge those who were returning from captivity," he said.

Through the African Youth Initiative Network (AYINET), Ochen began mobilizing volunteers who went around to villages looking for sick people who needed treatment.

"We didn't have money, but we volunteered to take them from our camp to a neighboring camp for treatment," he explained.

"Every time we treated someone, their expression and definition of peace became practical; someone who was in physical pain for years getting healed, emotionally supported," Ochen said.

"They became peaceful in mind and in life and started seeing the world differently," he added proudly.

AYINET went on to carry out additional medical and surgical rehabilitation activities.

According to Ochen, since 2006, it has supported at least 5,000 people across the greater north, including some whose lips, ears and noses were cut off by LRA rebels.

"So we said, instead of creating more suffering, let's create more opportunities for healing and let's speak for the most voiceless people," he said.

Ochen himself has had his own demons to fight.

He was at The Hague on Jan. 26 when Dominic Ongwen, a notorious LRA commander, made his first appearance at the International Criminal Court (ICC).

"I survived many abductions coordinated by Ongwen," Ochen told AA.

"When we were growing up, you would run away upon hearing that this group was commanded by Ongwen or Odhiambo Okot – these were the most vicious of the LRA commanders," he recalled.

"But sitting in the same room with Ogwen, I looked at him and said to myself that this is the guy who for long wanted me dead, abducted people and took so many lives," Ochen recalled of the ICC court appearance.

"He also commanded the team that abducted my brother. And there he was, with a smooth face, fully dressed in a suit," he said.

"I kept thinking, what would the victims think – those whose noses, lips and ears Ogwen ordered chopped off –seeing him like that," Ochen added.

"Ongwen will never account for everything he took from us. But I was happy to be there and see justice take its course," he told AA.

He added: "But I was sad that there were so many victims that did not live to see that day."

Ochen said his nomination for the Nobel peace prize had made him all the more humble, especially that the American Friends Service Committee had previously nominated the likes of Martin Luther King Jr., Mahatma Gandhi, U.S. President Jimmy Carter and Archbishop Desmond Tutu, among others.

"I still wonder if I really deserve to be in this league of people," he told AA. "I feel honored; I know it comes with a lot of responsibilities."

Ochen – who in the past has addressed the UN General Assembly, U.S. Congress and a NATO summit – believes he has been recognized for his efforts to achieve national reconciliation and help former victims use non-violent methods to address their pain and suffering.

To him, the prestigious nomination is not only good for the image of Uganda, but of Africa as a whole.

"People often imagine Africa as a violent continent where the young people are angry and kill each other," he lamented.

"Yes, we see a lot of that – but there are so many peace-loving Africans too," he insisted.

Ochen considers the nomination a win-win situation for him, no matter how things work out.

"I take it as appreciation for work done. Winning it [the prize] would be divine, but the recognition is enough to raise awareness about my people's plight," he told AA.