A water shortage in Dakar, now in its third week, is creating street entrepreneurs specializing in providing plastic containers or jerkins to citizens in the Senegalese capital. 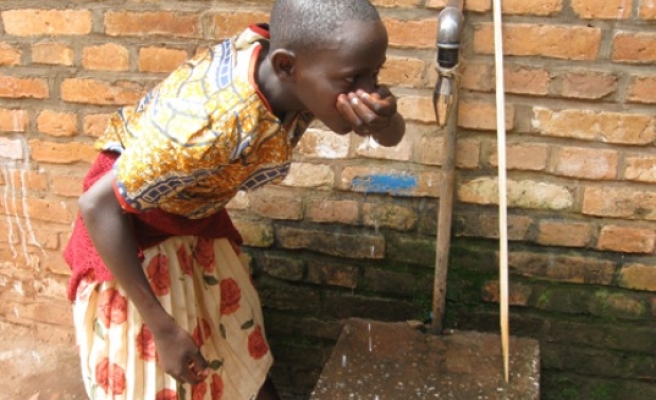 A big smile lights up the face of Alassane Faye, 42, as he watches his stock of jerkins and bottles fly from the shelves of his tiny shop in Dakar's popular Grand Yoff market.

"I have sold 13 small jerkins since this morning, each for $3 dollars," a jubilant Faye told Anadolu Agency.

An acute shortage of running water has plagued capital Dakar since September 12, when one of the main water pipelines was damaged.

The problem has forced thousands of citizens to roam the capital's streets with jerkins, bottles and buckets seeking water for their families.

Long queues of people, who can't afford bottled water, can be seen across the capital near makeshift wells and water trucks.

Many of them complain about having to walk long distances to obtain drinking water.

Traditionally, selling jerkins has been a small, not very lucrative business.

"I honestly did not used to sell more than ten [jerkins] per week," Faye recalled. "Now I may sell the same number per day."

Jerkin sales, he added, were "flourishing."

Officials blame the water shortage, now in its third week, on damage to the capital's main supply pipeline in Keur Momar Sarr, a small northern locality roughly 200km from Dakar.

State-run water agency SDE said its engineers were working to fix the damage.

Visiting the site on Saturday with his prime minister, President Macky Sall said the government would pay this month's water bills for all citizens affected by the crisis.

He told reporters that the government would also commission more tankers and more military personnel with a view to easing the inconvenience to the public.

The government has scrambled to provide makeshift solutions to the crisis by setting up army-supervised water distribution points in areas where water trucks are present.

While Faye sells jerkins and small bottles in his tiny shop, Daouda Sadio, 32, roams the streets collecting used ones.

"Every morning I go near the airport visiting the [dumpsters] and pick jerkins and bottles from there," Sadio told AA. "When I collect some, I go back home, clean them and sell them again."

Sadio said he had managed to sell seven jerkins and bottles on Saturday morning and another nine on Sunday afternoon.

"This is a great deal for me," he beamed. "I have never thought of selling jerkins and bottles, but it's a good job for the moment."

The bottles are typically used for vegetable oil or, in some cases, toxic products.

Those selling water containers, like Faye, usually buy them at very low prices from people like Sadio.

"Before the shortage, I could buy a 20-liter bottle for around fifty cents. Now I cannot even [buy this] because of the new and sudden interest," Faye noted.

For many, water jerkins and bottles have become part of their daily lives.

"We were using the tap, so we did not need to stock water – either in basins or in jerkins," 52-year-old teacher Ibrahima Sidibé told AA.

Now, however, the situation has changed.

"We just had three 20-liter jerkins and I wanted more, so I bought three others for roughly $10," said Sidibe.

"When I buy vegetable oil each month, it is delivered in a 20-liter bottle," Amina Mbaye, who works for a local NGO, told AA.

"I used to throw it out after using the oil because it took a lot of space in my kitchen," she said. "But from now on, I will no longer throw them out."

"Since the water shortage crisis started, I have had to buy five bottles, which is a lot of money," Mbaye added. "Honestly, it's very hard this month; very hard."

"Now it's easier to have fuel or petrol than to have water."