Rebels pushed north to a settlement called Bir Shuaib, taking them within 25 km (15 miles) of their target of Zawiyah, a town less than 50 km from Tripoli, the stronghold of Libyan leader Muammar Gaddafi. 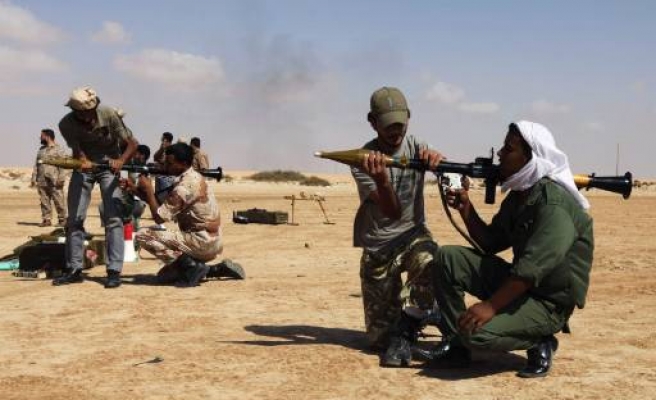 Rebel forces in western Libya drove their offensive north toward the town of Zawiyah near the Mediterranean coast on Thursday, trying to get within striking distance of the capital, Tripoli.

They pushed north to a settlement called Bir Shuaib, taking them within 25 km (15 miles) of their target of Zawiyah, a town less than 50 km from Tripoli, the stronghold of Libyan leader Muammar Gaddafi.

"We've gone past Nasr village and right now we're about 25 km from Zawiyah," said Faris, a rebel fighter. Rebels prevented reporters from getting up to the new front line to see for themselves.

Evidence of help from NATO air strikes was seen at the village of Shalghouda, on the route of the rebel advance.

There were signs of recent fighting and a large building had collapsed, apparently after being hit by a NATO bomb or missile.

A green tent, green army cap and green army uniform lay on the ground among pulverised concrete -- the colour of government forces fighting under the flag of Gaddafi's Libya.

Rebels said they had taken the village of Nasr, where there was a concentration of pro-Gaddafi forces.

On the edge of Bir al-Ghanam, south of the new front line, fighters drove by in pick-up trucks and yelled "Allahu Akbar (God is greatest), victory in Nasr".

At a nearby checkpoint young rebels played football and said they were happy because they expected victory soon. There was an array of pick-up trucks with sand oiled on for camouflage.

Modified helicopter rocket launchers were mounted on the back of the pickup trucks.

From Misrata, a port city east of the capital controlled by anti-Gaddafi forces, there were unconfirmed reports of a rebel offensive to break through a partial encirclement by Gaddafi forces, striking south in the direction of Tawurgha.

At least two rebels were killed and over a dozen were wounded there, according to one unofficial report from a source in rebel-held Misrata.

The rebels in the west have advanced rapidly since capturing Bir al-Ghanam on Saturday, breaking weeks of stalemate on this front in Libya's civil war.

Gaddafi's forces launched Grad rockets at rebel positions in the small desert settlement on Wednesday and rebels fired back with rockets and machine guns. Gaddafi describes the rebels as rats and says they are criminals inspired by al Qaeda.

Thick white smoke was rising at the edge of Bir al-Ghanam during the fighting. One rebel was killed and 10 were wounded, doctors said. There was no word on government casualties.

Zawiyah is the hometown of many rebels fighting their way north towards the main highway running parallel to the Mediterranean shore into the heart of Tripoli.

Rebel reinforcements in jeeps with anti-aircraft guns were brought up to Bir al-Ghanam on Wednesday and both sides exchanged insults over the army radio network.