Ihsanoglu said more than 3 million people faced starvation in Somalia, adding that the OIC was set to deliver food to 100 thousand people is parts of the country. 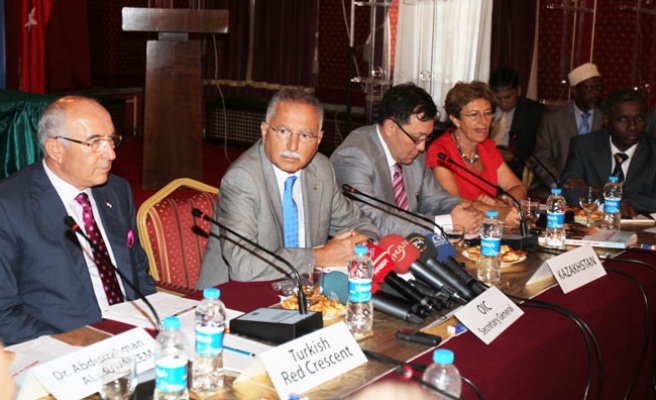 The world's largest Muslim body has mobilized humanitarian relief organizations in an urgent session in İstanbul to save millions of starving and suffering Somalis in the face of one of the world's worst famines in the Horn of Africa.

"This meeting is being held in response to an alarming humanitarian crisis prevailing in the Horn of Africa and in particular in Somalia, where severe famine is threatening the life of over 3 million people," Ekmeleddin İhsanoğlu, the secretary-general of the Organization of Islamic Cooperation (OIC), told participants of a meeting of the Alliance of OIC Relief Organizations on Thursday.

Relief efforts under OIC auspices could be the most effective way to reach out to Somalia's refugees, who are in desperate need of food and shelter.

The OIC said the meeting is the first initiative of its kind to form a coalition of a number of Islamic relief organizations to contain the tragic situation in the area.

Aid agencies say they cannot reach more than 2 million Somalis facing starvation in the parts of the country where militants control much of the worst-hit areas.

Representatives from 15 countries, as well as the Turkish Red Crescent (Kızılay) and other humanitarian institutions, participated in the aid conference.

İhsanoğlu praised the activities of the OIC, which he said has been fully engaged with its partners as a leading organization. He said the OIC will soon start distributing food to more than 100,000 affected people with its partners.

Some 3.7 million Somalis, almost half of the population, are going hungry, with drought hitting some 11.6 million people across what local media have dubbed a "triangle of death" straddling Kenya, Somalia and Ethiopia.

There are about 400,000 displaced people in the capital Mogadishu, with about 1,000 new arrivals each day, the UN's refugee agency (UNHCR) said in a statement on Tuesday. It estimated that 100,000 internally displaced persons have arrived in the city over the last two months.

The OIC secretary-general welcomed what he defined as a "generous" donation of $60 million by Saudi King Abdullah and $10 million by Kuwait to Somalia, to be distributed by the OIC.

In an emergency meeting in Rome on Monday, UN agencies attempt to raise $1.6 billion from donor countries and private companies for famine-hit regions.

The United Nations' top humanitarian and relief official, Valerie Amos, told reporters that just under $1 billion has been received from donors so far, but that "we need another billion."

The European Commission said it would immediately give a further 28 million euros ($40 million) on top of the 70 million euros it has given the region this year. EU governments have made further donations.

The World Food Programme says it needs an extra $360 million in urgent funds. Oxfam says that overall another $1 billion is needed to handle the situation.

The UN is pressing its efforts to gather $1.6 billion in aid in the next 12 months, with $300 million of that coming in the next three months.

Last week, the US pledged an additional $28 million in aid for the drought crisis on top of more than $431 million in emergency assistance to the Horn of Africa this year.

İhsanoğlu said humanitarian gestures by Saudi Arabia and Kuwait will be followed soon by many OIC countries and financial institutions as a sign of their commitment and solidarity at these critical moments.

The secretary-general said the OIC has called for the establishment of a large coalition under the OIC to address the emergency situation in Somalia and the Horn of Africa in general.

He said the coalition will be an effective tool for the distribution of emergency relief, the provision of necessary and prompt information on the development of the situation, the mobilization of resources, and in planning for the recovery and rehabilitation period later.

İhsanoğlu also called on Muslim civil society organizations and member states to generously contribute in this humanitarian campaign that the OIC is leading. He also urged all Somali factions to immediately stop all hostilities during the Muslim holy month of Ramadan.