Having initially thought the blast was set off remotely, investigators found the body of a 19-year-old inside the car which exploded and concluded he was a suicide bomber. 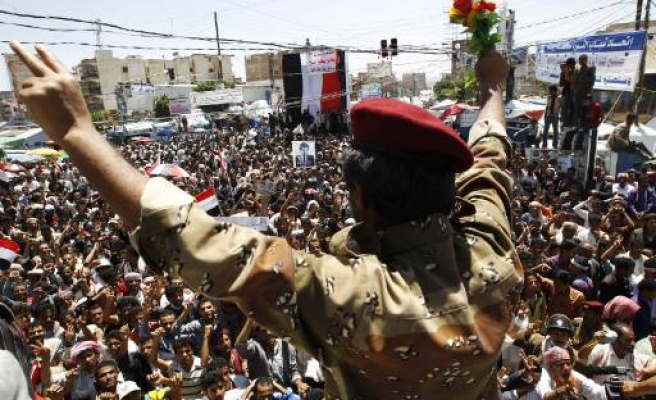 Yemen's defence minister survived a suicide bomb attack on his convoy in the south on Tuesday, while thousands of protesters took to the streets of the capital repeating their calls for the president to quit.

The blast in Aden wounded seven soldiers travelling in the lead vehicle of the ministerial motorcade, but Defence Minister Mohammed Nasser Ali, who was riding in the second car, was unharmed, a local official said.

Thousands of people marched in Sanaa for a second day of protests to mark their anger at Saleh's surprise return to Yemen on Friday. He had been in Riyadh for three months receiving treatment after a June bomb attack.

Since his comeback, fighting has tapered off but tensions are high and any movement on a long-stalled Gulf power transfer plan appeared to slow. Some negotiators accuse the ruling party of using the distraction over Saleh's return to delay a deal they that had been close to finalisation before violence broke out last week.

"The people want to rebuild Yemen," demonstrators shouted, waving Yemeni flags and carrying pictures of some of the 100 people killed in the latest violence, the bloodiest episode of the eight month protest movement.

"These political negotiations are endless, they're destroying our revolution," said Abduqassim Nassiri, 65, who said he was unemployed. "We have to keep pushing, we have to change the regime and I think that is worth dying for."

In Aden, officials told Reuters what they initially thought was a remote-controlled bomb now appeared to have been a suicide attack. Investigators found the body of a 19-year-old inside a car which exploded and concluded he was the bomber.

It was the second time in a month that the defence minister has narrowly escaped with his life.

"No to civil war"

A bid to escalate protests ten days ago by marching into government controlled territory sparked fierce battles between loyalist troops and forces lead by army defector General Ali Mohsen, who has vowed to protect the protesters.

Heavy shelling rocked the capital and residents hid away at home as gun battles erupted on their streets.

Many feared Saleh's appearance would compound the violence in Sanaa and hasten a slide into war. But while the streets remain heavily sand bagged and jittery soldiers in armoured vehicles man most crossroads, fighting has calmed.

"Peacefully, peacefully, we don't want a civil war," the protesters shouted on Tuesday, making peace signs with their fingers as they marched past dozens of Mohsen troops carrying rocket launchers and machine guns.

The relative calm over the past two days does not appear to have sped up negotiations over a Gulf-brokered transition plan, which Saleh has backed out of three times but says he still favours as a means of ending the crisis.

Politicians and international negotiators say a deal seems close in theory but the opposition and the government have yet to make any moves to finalise it. The ruling party has said it wants to hold talks to complete the deal. The opposition argues the plan is fine and there is nothing to talk about.

"We're again close to signing," said Yemeni analyst Abdulghani al-Iryani. "If they don't then it's clear that his (Saleh's) goal was to come back and stall as long possible."