One civilian was killed in the capital Sanaa in clashes between the forces of general Ali Mohsen al-Ahmar who defected from Saleh in March and the Republican Guard, which is commanded by his son. 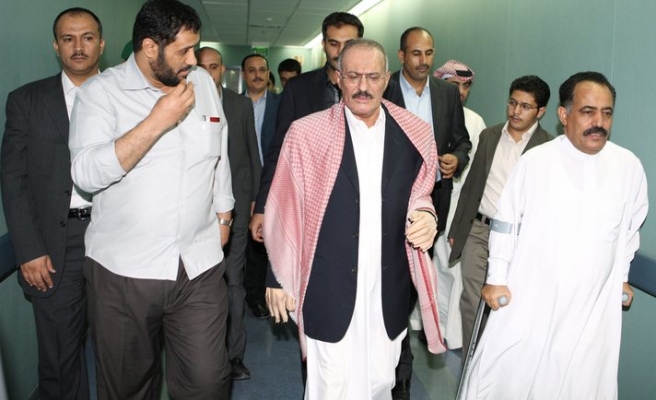 A leading member of Yemen's opposition called on Western countries to freeze the assets of President Ali Abdullah Saleh, who is clinging to power despite months of protest against his 33-year rule.

Sheikh Hamid al-Ahmar, a tribal leader and wealthy businessman in Yemen's main opposition party, the Islamist Islah, also lashed out at Saleh's sons' "desperate" attempts to keep his family in power as their father recovers in Saudi Arabia from a June assassination attempt.

"I call on Western states... to begin proceedings to seize the possessions and money of Saleh and his family, because they belong to the Yemeni people," he said in an interview with pan Arab daily al-Hayat, adding those funds could be used to repay the country's debts.

The protests have paralysed the impoverished Arabian Peninsula state, where even before the unrest some 40 percent of the population lived on less than $2 per day.

Governments worldwide have responded to crackdowns on Egyptian, Tunisian and Libyan protesters this year by freezing their long-time leaders' assets.

But while veteran presidents in Egypt and Tunisia bowed to pressure they quit, Saleh has proved a shrewd political survivor, and officially remains in power.

Ahmar praised Saudi Arabia's role in mediating the crisis, dismissing accusations it is thwarting Yemeni demands for change: "I see the Gulf initiative, which was essentially a Saudi effort, as one of the supporting aspects of the revolution," he said.

Saudi Arabia has spearheaded a Gulf Arab plan to end Yemen's political deadlock by easing Saleh out of office, but he backed out of signing it three times at the very last minute, leaving Yemen in political limbo.

Last week Saleh said he would look at reviving the initiative, which would see him hand over power to Vice President Abd-Rabbu Mansour Hadi, but his opponents question whether this is yet another stalling tactic.

"It's clear Saleh must realise his future as President is finished and that everything he is doing now is just a desperate attempt to implement his plan to hand power to his sons," said Ahmar.

"One civilian killed in capital"

Away from the negotiating table, one civilian was killed in the capital Sanaa in clashes between the forces of general Ali Mohsen al-Ahmar who defected from Saleh in March and the Republican Guard, which is commanded by his son.

Residents in the west of the city said they heard the sound of shelling and heavy exchanges of gunfire.

An uneasy ceasefire mostly prevailed in Sanaa after Saleh flew to Saudi Arabia for medical treatment, but tensions have been rising in the past few days.

The media centre for the protesters quoted a military source as saying a reconnaissance plane circling over the headquarters of General Ali Mohsen's first armoured brigade had been hit by an aerial defence system and forced to turn back.