A group of Yemeni politicians left a newly formed opposition council on Saturday, exposing divisions in the anti-government movement in a country convulsed by months of violent protests. 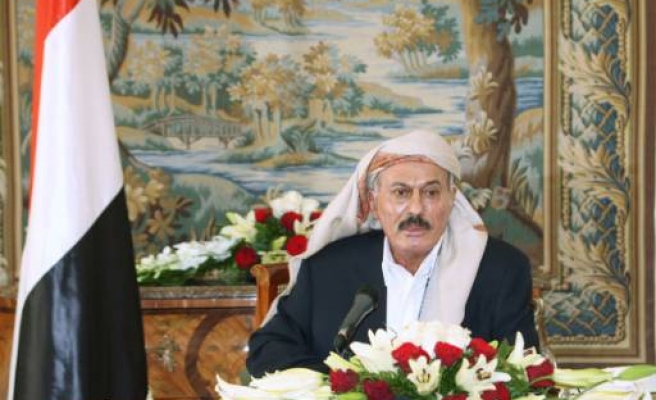 A group of Yemeni politicians left a newly formed opposition council on Saturday, exposing divisions in the anti-government movement in a country convulsed by months of violent protests.

President Ali Abdullah Saleh is clinging to power despite a wave of demonstrations against his 33-year rule in the Arab nation.

The opposition has struggled to unite into a strong movement and Saleh has so far defied international pressure to step down.

The 143-member National Council was formed on Wednesday by two opposition groups in a bid to consolidate their fledgling movement. But on Saturday, two dozen of its members announced they were quitting in a row over representation.

"We have been marginalised and our position and point of view have not been considered," 23 opposition figures representing the oil-exporting south said in the statement.

Despite their move, the National Council elected Mohammed Basindwa, a key opposition leader and former foreign minister from the southern port city of Aden, as its president.

They said they quit because of unequal representation between members from the south and the north of the country in the council. North and South Yemen united under Saleh in 1990 but southerners often accuse the north of discrimination.

"Any national council assumes the responsibility of leading the peaceful revolution of the people to overthrow the remains of the system, and should be equally divided between the South and the North, and would strengthen mutual trust and mobilise all energies and capabilities to accelerate the revolution," they said in the statement.

Popular protests against Saleh erupted this year during uprisings that ousted the presidents of Tunisia and Egypt.

Saleh, in power since 1978, said on Tuesday he would soon return home from Saudi Arabia where he is recovering from a June assassination attempt in which he was wounded.

Opposition groups have tried to unite and form transitional government councils in the past but so far their attempts have been patchy, pointing at an increasingly fragmented movement.

One of the two groups that formed the latest council, the JMP, is a grouping of Islamists, socialists and tribal elements. It spent weeks trying to broker Saleh's exit and in May signed a deal drawn up by the Gulf Cooperation Council which sought to end the veteran leader's rule.

The impoverished country of 23 million, at the tip of the Arabian Peninsula, has been in turmoil since January when protesters took to the streets demanding Saleh leave office.

In the latest incident, six armed men were killed in an attack on a military camp of the Republican Guard on the outskirts of the capital Sanaa on Saturday, the website of the ruling party said.

"The brigade repelled the attack and caused the terrorist elements heavy casualties and forced them to flee," it said.