Yemeni security forces fired on protesters in the southern city of Taiz on Thursday and fierce clashes erupted between tribesmen and army troops outside the capital Sanaa, opposition sources said. 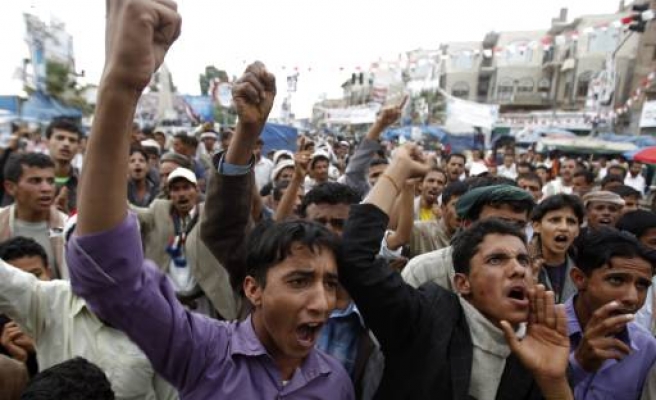 Yemeni security forces fired on protesters in the southern city of Taiz on Thursday and fierce clashes erupted between tribesmen and army troops outside the capital Sanaa, opposition sources said.

Impoverished Yemen has been torn by sporadic violence as a mass protest movement pushing for an end to President Ali Abdullah Saleh's 33-year rule drags into its sixth month.

The turmoil in fractious Yemen has renewed fears it could become a failed state on the doorstep of Saudi Arabia, which holds the world's biggest oil reserves.

In Taiz, a hot spot of daily protests some 200 km (120 miles) south of Sanaa, activists said gunmen from the central security forces were raining fire on a square where demonstrators have been camped out for months.

"There is gunfire on the sit-in area now and we can also hear gunfire coming from a number of different streets," activist Bushra al-Maqtari told Reuters by telephone, shouting over the sound of shooting. She said it was still unclear how many had been hurt.

The attack began after a group of protesters marched outside of the sit-in area into the streets.

Demonstrators have grown increasingly frustrated by their inability to loosen Saleh's grip on power. Despite a bomb blast on his presidential compound in June that forced him to seek medical treatment in Saudi Arabia, Saleh has clung on.

Just two days ago, Republican Guard forces, which are headed by one of Saleh's sons, agreed a truce with pro-opposition tribesmen to stop fighting in Yemen's third city.

Farther north, in the town of Arhab outside of Sanaa, tribesmen there told Reuters that clashes had resumed between their fighters and army troops in the area.

They said warplanes had struck the sites where armed tribesmen were hiding after they attacked a military site in the area.

Yemen's defence ministry, in a text message sent to reporters in Sanaa, said its Third Mountain Infantry Brigade had been attacked. "The brigade is confronting armed men from the opposition that tried to sneak into its Samaa base," it said. "Terrorist militias used heavy weapons to attack the brigade."

One member of the brigade was killed and several wounded, but the defence ministry said its troops had inflicted heavier casualties on its opponents. The tribesmen have not yet given an estimate of deaths or wounded.

The United States and Saudi Arabia have tried to defuse the conflict in the Arabian Peninsula state by pressing Saleh to accept a power transition plan brokered by Gulf neighbours.

But the wounded Saleh has instead vowed to Yemen to lead a dialogue with the opposition and oversee a transition.

His foreign minister on Wednesday said the president would try to set up elections after such a dialogue, which the opposition has refused to participate in until the 69-year-old leader resigns.