Voting began for the next president of Zambia, one of Africa's most promising frontier markets, in what shaped up as a tight race between a populist lawyer and a wealthy economist. 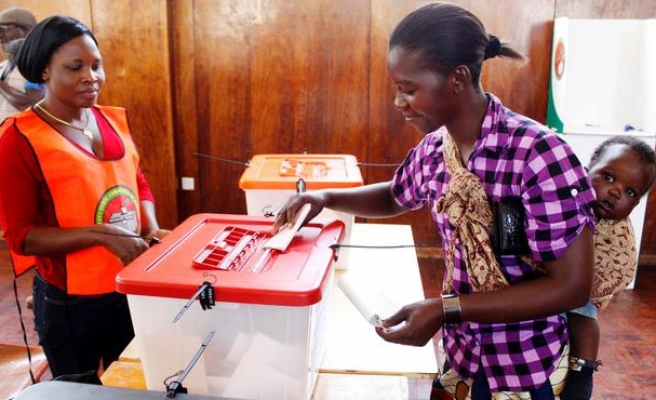 "As you can see, it is raining here but I have no option but come and cast my vote," Felix Banda, who was among the first people to vote in Lusaka central constituency, told The Anadolu Agency outside the polling center.

Banda said he would go back to his community to encourage those who are waiting for the rains to end to come and cast their votes.

Heavy rains began by midnight and had continued to the time when the polling stations opened at 6:00am local time (4:00am GMT) as scheduled, according to AA reporter.

Polls are expected to close at 6:00pm local time.

According to the Election Commission of Zambia, there are 5,166,088 registered voters eligible to cast their ballots.

They will elect a new president following the death of President Michael Sata in a London hospital late last year.

Voters will choose from among 11 contenders, including Defense and Justice Minister Edgar Lungu, who is contesting the race on the ruling Patriotic Front (PF)'s ticket, and Hakainde Hichilema of the opposition United Party for National Development (UPND).

Philomena Malenga, another voter, said she could not wait for the rain to end.

"Supposing it does not stop raining, what happens?" she told AA outside the polling center.

"This might cost my party the desired victory," Malenga insisted. "My coming here to vote is for victory and nothing will stop my party from winning not even these rains."

But in some parts of Lusaka the number of voters who turned out to cast their vote was low.

"We cannot yet say this is voter apathy," Chris Akufuna, a spokesman for the election commission, told AA.

"What have delayed voters at this moment are the rains," he suggested.

Akufuna is confidence that the voter turnout will improve later in the day.

"I am sure that by the time rains stop people will begin to trek in to cast their votes," he said. "Our prayer is that, the rain stops soon."

"It is also my prayer that those who are still home will not be discouraged by these rains," added the official.

Zambia has a population of over 13 million, according to a 2010 national census conducted by Zambia's official statistics agency.

Edgar Lungu, leader of the ruling Patriotic Front (PF), is seen having a slight edge over main rival Hakainde Hichilema, a businessman whose United Party for National Development has won over the middle-class and investors.

With no reliable opinion polls, few experts are keen to call a clear winner in the contest to succeed President Michael Sata, who died in office in October aged 77.

Lungu's campaign has focused on tapping into the grassroots support base of Sata, a populist leader from the majority Bemba tribe who won over the working class by funding infrastructure projects in poor, rural areas.

Hichilema, one of Zambia's wealthiest businessmen known locally as "HH", says his experience in the private sector will help him encourage foreign investment and diversify the southern African state's copper-dependent economy.

Zambia, the continent's biggest copper producer after Democratic Republic of Congo, has been one of the world's best performing economies in the last decade, averaging 6-7 percent growth as the mining sector boomed.

But growth slowed to 5.5 percent last year, the International Monetary Fund says, and could ease further with the price of copper, which accounts for 70 percent of export earnings, falling to a 6-year low this month.