Sata, who ruled the country since 2011, died in a London hospital last month 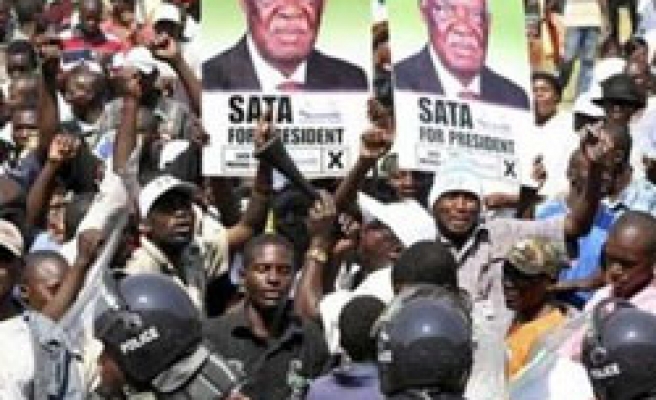 Tens of thousands of Zambian mourners on Tuesday laid to rest their late president, Michael Chilufya Sata, who died in a London hospital last month.

"The best way to remember president Sata is not so much to emulate what he stood for, but to ensure that all the dreams he had for Zambia and its people are continued," acting President Guy Scot told mourners who gathered at Embassy Park to bid the deceased leader farewell.

"As we pay our final respects and to honor the memory of our beloved president, we also look forward to a future of unshakeable unity among all the people of Zambia, whereas we shall work hand in hand for a just, equitable and prosperous nation," he said.

Sata's widow, Christine Kaseba, broke down in tears when the casket carrying the body of her late husband was lowered into the ground.

Thousands of people were able to watch the funeral ceremony – which was broadcast live – on giant screens set up by the government in selected townships and homes.

His body lied in state at State House on Monday to allow visiting heads of state and dignitaries to pay their last respects.

The burial was attended by at least nine African heads of state.

These included Robert Mugabe of Zimbabwe, Joseph Kabila of the Democratic Republic of Congo, Hifikepunye Pohamba of Namibia, Uhuru Kenyatta of Kenya, Yoweri Museveni of Uganda, Paul Kagame of Rwanda and Armando Emilio Guebuza of Mozambique.

"One thing for sure about president Sata is that he instilled a culture of transparency in his government and launched one of the biggest anti-corruption campaigns in Zambia," President Mugabe said. "We shall definitely miss this great son of Africa."

He noted that the late Zambian leader had never shied away from speaking his mind.

The Zimbabwean leader described Sata as a dependable ally and a friend of the people of Zimbabwe.

"President Sata served his country, the SADC region and Africa with a lot of dedication and devotion," Mugabe asserted.

All major roads in the city are closed as the body of President Sata will made its final rounds starting with parliament and later State House.Sata led his Patriotic Front to victory in 2011 after defeating then-president Rupiah Banda of the Movement for Multiparty Democracy.