12 were killed and others injured when at least one gunman opened fire at the U.S. Navy Yard in Washington 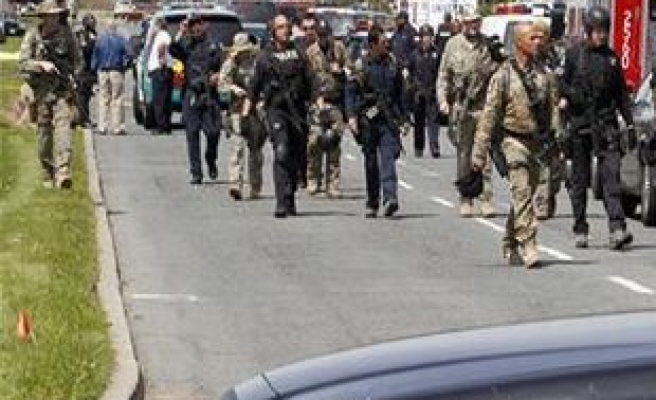 At least 12 people were killed in a shooting on Monday at the U.S. Navy Yard in Washington, where one suspected gunman was among the dead and authorities were searching for two other possible assailants wearing military-style clothing, officials said.

The exact number of dead and wounded fluctuated in the hours following the shooting, which took place about three miles (5 km) from the White House, starting about 8:30 a.m. EDT (1230 GMT).

The Washington D.C. mayor and the police chief said there were 12 fatalities in the shooting at the Naval Sea Systems Command, one of five such commands where civilians, military personnel and contractors build, buys and maintain Navy ships and submarines. About 3,000 people work there.

"We have no indication of motive at this time," said Washington D.C. police chief Cathy Lanier.

Police described the two other possible suspects as a white man and a black man, each wearing military style clothing, although other law enforcement officials cautioned that it was still unclear whether more than one gunman was involved.

"We are confronting yet another mass shooting, and today it happened at another military installation, in our nation's capital," said President Barack Obama, who vowed to enact "sensible" gun control measures after a gunman shot dead 20 school children and six adults at an elementary school in Connecticut last December.

"They know the dangers of serving abroad, but today they face the unimaginable violence that they wouldn't have expected here at home," said Obama, who spoke at the start of a speech on the U.S. economy.

Patricia Ward, who works at the Navy Yard, said she hear three shots "pow, pow, pow" and then four more shots after a pause.

"Everybody was panicking and trying to decide which way to get out," Ward told reporters.

Washington police declined to give a number of fatalities, saying there were "multiple victims deceased inside."

Among the injured was a District of Columbia police officer, who was in stable condition in surgery, and one other law enforcement officer, officials said.

Washington Hospital Center said it was treating three gunshot victims, who were in critical condition, and was expecting more to arrive but it was not clear how many.

At George Washington University, a man in his 60s died of a single gunshot wound to his head, said Babak Sarani, head of trauma surgery.

The man was shot in his left temple and the injury "was not survivable by any stretch," Sarani told reporters, adding he was unsure what type of weapon was used or whether the bullet had exited the victim's body.

The other two possible suspects were described as black man, about 50, with a long gun a drab olive military uniform, and a white man with a pistol, a Navy-style short-sleeved khaki uniform and a beret.

The shooting hit the military establishment less than three weeks after U.S. Army psychiatrist Major Nidal Hasan was sentenced to death for murdering 13 people in 2009 at Fort Hood, Texas, where he gunned down unarmed soldiers in what he later called retaliation for U.S. wars in Muslim countries.

Dozens of police and emergency vehicles surrounded the complex in southeast Washington, which is about a mile (1.6 km) south of the U.S. Capitol. Helicopters circled the headquarters with some touching down on the building's roof.

The Federal Aviation Administration said it briefly suspended departures at Reagan National Airport. The District of Columbia Public Schools have put six schools and an administration building on lockdown as a precaution.

The Washington Navy Yard is the oldest shore facility of the U.S. Navy. A former shipyard and ordinance plant, the facility in southeast Washington is currently home to the Naval Sea Systems Command, Navy museum and other facilities.

The yard, less than 2 miles (3 km) from the Capitol building, is a favorite for ceremonies. The Chief of Naval Operations, Admiral Jonathan Greenert, formally welcomed his Chinese counterpart to the United States in a ceremony there on Thursday.