Three people were arrested on Tuesday for wearing masks at the downtown rally, which drew a crowd of about 100 activists, a far cry from the thousands the group had in its heyday. 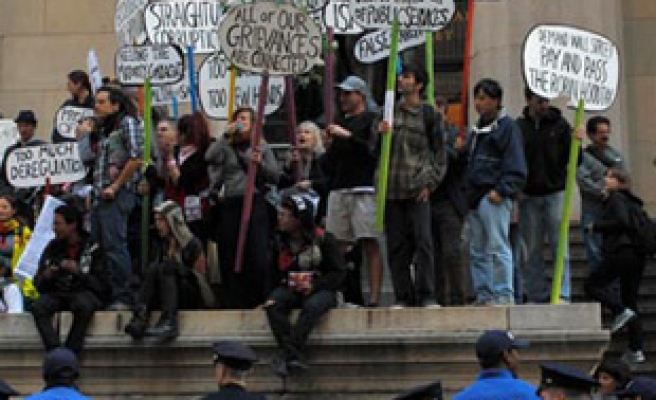 Two years after getting its start in a downtown Manhattan park, Occupy Wall Street, the populist movement protesting economic inequality, marked its second anniversary on Tuesday with a protest near the New York Stock Exchange and a planned march near the United Nations.

The group, which inspired dozens of spin-offs around the world with its "we are the 99 percent" slogan but drew criticism for its unclear goals, has focused Tuesday's events on a new objective: calling for a small tax on Wall Street financial transactions, organizers said.

Dubbed the "Robin Hood Tax," the legislation would impose a levy of 0.5 percent on Wall Street trades. The money collected would be earmarked for different funds and non-profit organizations and in turn distributed to schools, hospitals and local governments, according to Occupy organizers and proponents of the legislation.

"This kind of tax stream has globally become a very accepted form of revenue generation," he said.

Three people were arrested on Tuesday for wearing masks at the downtown rally, which drew a crowd of about 100 activists, a far cry from the thousands the group had in its heyday.

Organizers expected about 1,000 people later in the day to assemble for a rally front of the United Nations, with plans to march to the headquarters of JPMorgan Chase & Co and the Metropolitan Transit Authority, New York City's mass transit agency.

The rallies come two years after Occupy demonstrators first set up camp in Zuccotti Park near the NYSE to call for changes in how financial institutions are regulated. The movement quickly spread to cities around the world and spinoff "Occupy" groups have been set up to address everything from disaster relief to human rights.

In focusing attention on the "Robin Hood Tax," Occupy organizers also hope to counter criticism that the Occupy Wall Street movement was too broad and lacked a clear goal.

Critics of the tax say the law it would decrease the volume of financial transactions on Wall Street, prompting companies to move overseas, taking jobs and money with them.

With the passage of a financial transaction tax "thousands of high-paying jobs would leave the U.S., sharply reducing employment at hundreds of non-financial companies that depend on these customers," the conservative Heritage Foundation said in a report released earlier this year.