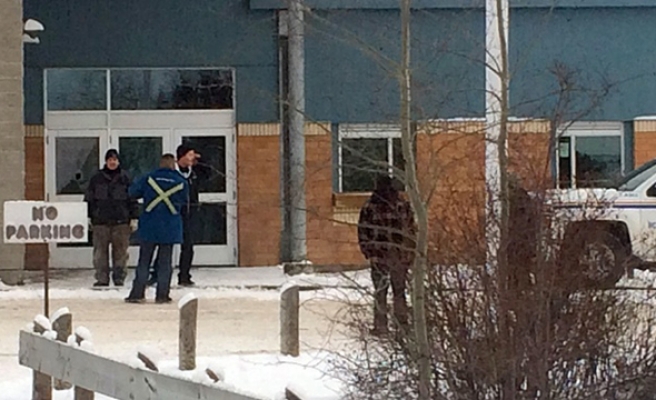 Four victims were killed Friday and several wounded in a shooting at two separate locations, including a high school, in a small remote northern Canadian community.

A male suspect is in custody, Prime Minister Justin Trudeau told reporters during an emergency press conference in Davos, Switzerland, where he is attending an economic summit.

The shootings happened about 1900GMT in a residence and a school building in La Loche, a community of about 2,600 that is part of the Dene (Indian) Nation in the northern part of the province of Saskatchewan.

La Loche is on the edge of Canada’s boreal forest, about 900 kilometers from the provincial capital of Regina.

The Royal Canadian Mounted Police (RCMP) said an arrest was made about 1945GMT.

“One male was taken into custody outside of the school,” a RCMP spokesman said during a televised press conference in Regina, adding that a firearm was seized.

Early reports said five people had been killed, but the RCMP said that number was changed to four.

Police said because it was an “ongoing investigation” they would not release information on the casualties and would only say that the suspect was male.

The Canadian Broadcasting Corporation (CBC) reported that it was the worst school shooting “in memory” in Canada.

Trudeau said residents of La Loche, particularly parents of students, were stunned by the violence. “Obviously, this is every parent’s worst nightmare,” he said. “The community is reeling and all of us across the country, hearts are going out to the families and to the whole community.”

One tenth grade student recounted his experience for the CBC.

“I ran outside the school,” said Noel Desjardins. “There was lots of screaming. There was about six, seven shots before I got outside. I believe there was more shots by the time I did get out.”

In a statement, the chief of the Federation of Saskatchewan Indian Nations said he could not believe what happened in the small community. “We are in shock and in disbelief upon hearing about the tragedy in La Loche,” said Bobby Cameron.

More details are expected to be released Saturday.