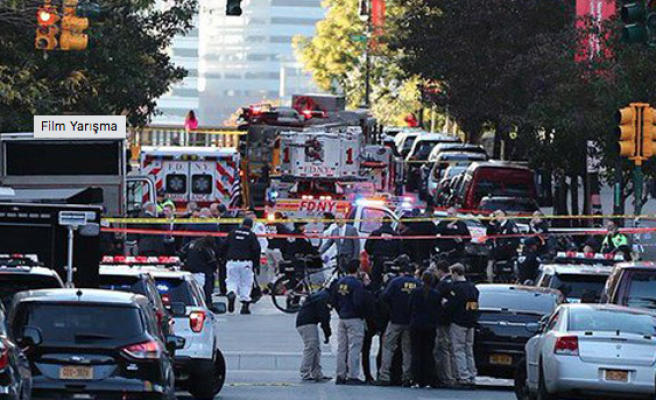 Eight victims were killed Tuesday after a motorist drove onto a pedestrian and cycling path near the West Side Highway in New York City in an "act of terror", according to officials.

Six of the deceased, all males, died at the scene. Two victims died in a local hospital, Fire Department Commissioner Daniel Nigro said at a news conference.

More than a dozen others were injured.

"This is a tragedy of the greatest magnitude," Police Commissioner James O'Neil told reporters.

Media reports that cited law enforcement sources identified the suspect as Sayfullo Saipov, 29, from Uzbekistan, who entered the U.S. in 2010.

Police said the suspect exited the vehicle after striking multiple victims and a school bus. The suspect was shot in the abdomen after displaying "imitation firearms", police said.

Multiple witnesses reportedly told police they heard Saipov scream “Allah U Akbar”, or God is the greatest in Arabic, before exiting the vehicle.

"This was an act of terror, and a particularly cowardly act of terror," said Mayor Bill de Blasio. "New Yorkers do not give in in the face of these kinds of actions."

President Donald Trump also weighed in, writing on Twitter the attack "looks like another attack by a very sick and deranged person. Law enforcement is following this closely. NOT IN THE U.S.A.!"

He later appeared to blame ISIL for the attack in a separate tweet. “We must not allow ISIS to return, or enter, our country after defeating them in the Middle East and elsewhere. Enough!,” he said on the social media site referring to the Islamic State of Iraq and Syria, another name for ISIL.

Saipov reportedly left a note in Arabic in the crashed truck he used to inflict mass destruction, claiming the attack was for ISIL, according to reports.

Police urged everyone to stay away from the scene near the Freedom Tower.

The Department of Homeland Security issued a statement that said it is “closely monitoring the situation and working with our federal, state and local partners in responding to and investigating this tragedy.”

In what has become a playbook for officials after attacks, Governor Andrew Cuomo urged New Yorkers to live their lives as they would normally. “Don’t let them change us or deter us in any manner, shape or form,” he said at the news conference.

In keeping with that sentiment, a spokesman for the mayor’s office said the city’s famed Halloween parade would be held Tuesday night as scheduled, with a much greater police presence.

The New York governor also ordered One World Trade Center – constructed just feet from where the World Center twin towers once stood -- illuminated in red, white and blue -- the colors of the American flag.

A video purporting to be of the scene of the attack shows at least three victims lying on the ground.

The ambush is the first fatal terror attack in New York since Sept. 11, 2001.

A sixth man, Martin Ludovico Marro, is being treated at a hospital, it said in a tweet that added that the men were in New York to celebrate their 30th college anniversary.

“Argentina reaffirms its strongest condemnation of terrorist acts and violence in all its manifestations and reiterates the need to deepen the fight against this scourge,” the foreign ministry said in an earlier statement.

Belgium confirmed one of its nationals was also killed in the attack and three others were injured.

Reacting to the tragedy, U.K. Prime Minister Theresa May said she is "appalled by this cowardly attack" in a tweet that offered her condolences.

"Together we will defeat the evil of terrorism. UK stands with #NYC," she added.

And Qatar's foreign ministry separately condemned the attack in a statement that said Doha fully supports all measures the U.S. takes to maintain security and stability.