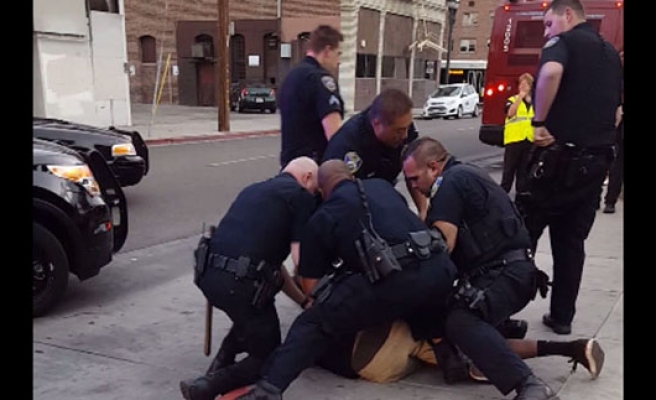 Mobile phone video of the incident that happened in Stockton, 130 kilometers (80 miles) east of San Francisco, shows an officer hitting the 16-year-old teen several times with his baton before eight other officers get involved.

Evan Avendano, the owner of the video posted on YouTube, said in an accompanying post that the teen was stopped by police for "jaywalking".

"The cop was telling him to take a sit but the teen kept walking to his bus but the cop kept grabbing his arm & the kid took off the cops hand off his arm so the cop took out his baton, that's when all this happened", he wrote.

In the video, the boy can be heard yelling "Get off!" as he apparently tries to push the officer away, while the officer repeatedly tells the teen to "stop resisting" as he presses his baton against the boy's face.

When the teen tries to push the baton away, the officer calls for backup and eight other officers soon arrive on the scene.

Several officers then slam the boy to the ground before handcuffing him while the others cordon the area, according to the video.

An unseen bystander can be heard in the video shouting, "That’s a kid. Are you serious? He didn’t do nothing wrong.”

The teen was later released from the police station unharmed, according to VICE News, citing Stockton police.

The YouTube video has been watched more than 450,000 times as of Friday morning.

The incident came on the heels of a string of cases of police violence against blacks across the country.

The incidents have stirred racial tensions, setting off nationwide protests over perceived injustices within the U.S. justice system.