With elections around the corner, the Aboriginal community of Canada are coming out en masse hoping to sway the ballot in their favour 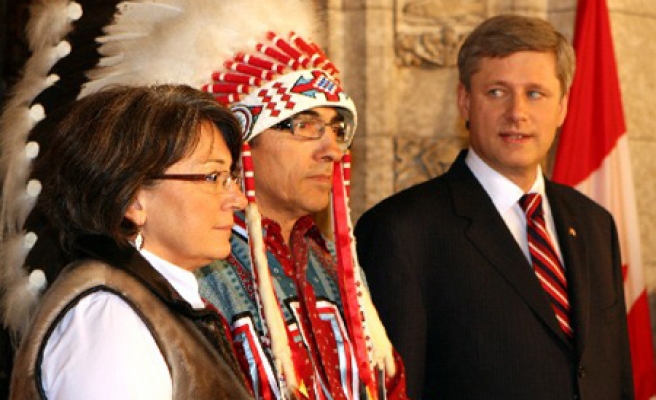 Canada's indigenous peoples have long shunned national elections in protest at the colonization of their lands. But natives are expected to come out en masse for the first time Monday to try to sway the ballot.

The push came from Perry Bellegarde, chief of the Assembly of First Nations, which represents 900,000 members of 634 tribes across Canada.

Turnout among aboriginals on Canadian reserves was 44 percent in the 2011 elections, compared to 61 percent for the general population.

Bellegarde himself has never voted before in a federal election but vowed to cast a ballot this round to set an example for aboriginals -- in hope of gaining traction in Ottawa on issues important to natives.

Since his pitch in August, "there's been a lot of buzz on social media" calling on indigenous people to participate in the democratic process, said Thierry Rodon, a politics professor at Laval University in Quebec following this historic movement.

Canada's First Nations number more than 1.4 million, or four percent of the population -- theoretically not enough to impact the election results.

But the race between the incumbent Tories, led by Stephen Harper, Justin Trudeau's Liberals and Thomas Mulcair's New Democrats is close. And the AFN has identified 51 electoral districts out of 338 where the aboriginal vote could decide the winner, either because of a slim margin or a high aboriginal population.

"We're telling our members to take the time to vote in order to get a government elected that will work with us" on issues important to natives, said Robert Bertrand of the Congress of Aboriginal Peoples representing Metis, off-reserve and non-treaty Indians, and some Inuit.

In power since 2006, Prime Minister Stephen Harper has had a difficult relationship with Canada's indigenous communities.

He earned widespread praise in 2008 for standing in Parliament and officially apologizing to natives for more than a century of abuses at boarding schools set up to assimilate aboriginals.

From there, things quickly degenerated as the two sides found themselves increasingly at odds over policy.

Harper rejected calls for a national inquiry into the death or disappearance of more than 1,000 aboriginal women since the 1970s, and other specific demands to end squalid living conditions on reserves, improve health and education, and settle outstanding land claims.

The dispute led to massive protests, including rail disruptions and one chief going on a hunger strike to bring attention to the plight of Canada's natives.

The latest took place last week in Montreal, where hundreds chanted and banged drums in a loud downtown protest, critical of parties for ignoring them. "Aboriginals count," read placards in the march.

The AFN has not endorsed any of the political parties in this contest.

But Bertrand said natives "should vote for the party that will best represent our interests in Ottawa."

The New Democrats and the Liberals have made overtures to natives in this campaign, while the Tories have kept mum.

"It is time for a new era that embraces a true nation to nation relationship (between Canada and native tribes) that is built on respect and, above all, makes meaningful progress when it comes to bringing about change," Mulcair said early this month.

Bellegarde welcomed the statement, saying the "nation-to-nation approach is the way forward." This perspective is rooted in the notion that tribes signed treaties in past centuries with British monarchs.

"The NDP addresses many of our key priorities and commits to high level engagement to work together to close the (social and economic) gap (between aboriginals and non-aboriginals in Canada)," Bellegarde said.

But he stopped short of endorsing the party.

"We will need to work with whichever party forms government and we want aboriginal issues to take a higher place on the national agenda," explained Dwight Dorey, head of the Congress of Aboriginal Peoples.