Arms control groups have criticised the Obama administration for proposing a $534 billion Pentagon base budget that includes new spending on the nuclear arms. 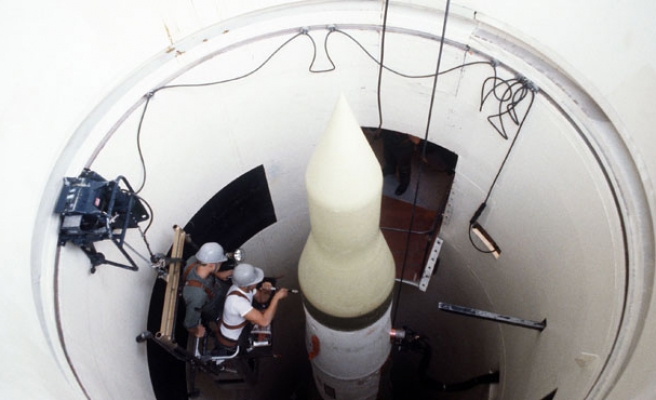 Renewed focus on the U.S. nuclear force after several scandals last year is improving conditions for airmen, but more work must be done, Deputy Defense Secretary Robert Work said on Wednesday after an icy tour of the only U.S. missile and bomber base.

Work said missile launch officers and maintenance workers he met at Minot Air Force Base in North Dakota were seeing the result of improvement efforts, including a deep cleaning of underground missile launch capsules and the purchase of new equipment.

But some parts of the nuclear force were still using floppy computer disks and 25-year-old computer technology, Work said after a tour of the base, where temperatures around 2 degrees Fahrenheit (-16 Celsius) were accompanied by blistering winds.

"Nothing is better than being able to look the troops in the eye, and the officers, and hear what they're saying," Work said. "It was really good to put eyes on target. We still have work to do."

He said the morale of the troops he spoke to was good and they were seeing the impact of increased spending, including a rise in staffing levels. But he said they wanted to know whether the investments would continue.

Work's visit to the base, the only U.S. facility housing both nuclear missiles and bombers, came a week after the Pentagon rolled out a 2016 budget that calls for $8 billion in new spending on the nuclear force over the next five years, including about $1 billion for the 2016 fiscal year.

Arms control groups have criticized the Obama administration for proposing a $534 billion Pentagon base budget that includes new spending on the nuclear arms.

"The administration's budget request is deeply disappointing and a lost opportunity to make common sense adjustments to the current nuclear weapons spending trajectory," said Kingston Reif, an analyst with the Arms Control Association.

But two reviews ordered by Defense Secretary Chuck Hagel last year concluded the force was plagued by a culture of over-inspection and micro-management, as well as a "consistent lack of investment."

Hagel ordered reviews after a spate of incidents, including cheating on proficiency exams by missile launch officers and the sacking of the head of the force for drunkenness and bad behavior during an official visit to Moscow.

Hagel said he would seek a 10 percent increase in funding for the nuclear force, which cost about $15 billion annually. The funding request for 2016 fell slightly short of that figure, but the five-year amount was higher.