The Taliban marked the anniversary by vowing to keep fighting against U.S. forces in Afghanistan and saying they had no role in the Sept. 11 attacks. 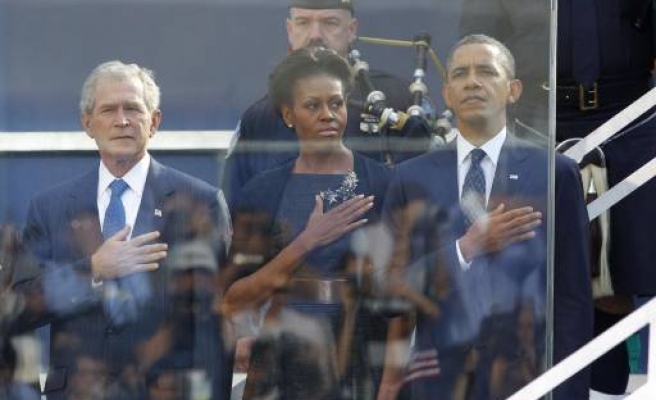 Americans on Sunday attended commemorative events to mark the 10th anniversary of the September 11, 2001, attacks, paying tribute to the thousands who died on that day.

Thousands gathered on a clear Sunday morning to grieve where the twin towers of the World Trade Center once stood. With security high and no traffic, there was an eerie silence where a decade ago the 110-storey skyscrapers collapsed after being hit by hijacked airliners, sending a cloud over lower Manhattan.

The somber ceremony -- with bagpipes, youthful voices singing the national anthem and firefighters holding aloft a tattered American flag retrieved from Ground Zero -- drew tears. Family members wore T-shirts with the faces of the dead, carried photos, flowers and flags in an outpouring of emotion.

For the first time, relatives saw the just-finished memorial and touched the etched names of their dead loved ones. Some left flowers, others small teddy bears. Some used pencils to scratch the names on paper, others took a photograph.

Many wept as the names of the dead were read, by wives and husbands, fathers, mothers, sisters, brothers and children, some choked with emotion at their personal loss.

"I haven't stopped missing my Dad. He was awesome," said Peter Negron, who was just a child when his father, Pete, was killed in one of the stricken towers. "I wish my Dad had been there to teach me how to drive, ask a girl out on a date and see me graduate from high school and a hundred other things I can't even begin to name."

The memorial includes two plazas in the shape of the footprints of the Twin Towers with cascading 30 foot (9.1 metres) waterfalls. Around the perimeters of pools in the center of each plaza are the names of the victims of the Sept. 11 attacks and an earlier 1993 attack at the trade center.

President Barack Obama visited the North Memorial Pool, which sits in the footprint of the north tower. He walked around the pool hand-in-hand with first lady Michelle Obama, former President George W. Bush and his wife, Laura.

"Arabs incapable of such attacks"

Police in New York and Washington were on high alert against a "credible but unconfirmed" threat of an al Qaeda plot to attack the United States again on the 10th anniversary.

Security was especially tight in Manhattan, where police set up vehicle checks on city streets as well as bridges and tunnels coming into the city. There was an unprecedented show of force in Manhattan from roadblocks on Times Square in midtown to the area around Ground Zero farther to the south.

"It was our Pearl Harbor," said John McGillicuddy, 33, a teacher from Yonkers, New York, getting coffee and carrying two American flags on his way to the World Trade Center, referring to the Japanese attack that led America to join World War Two.

"Every year, September is always rough," he said, as he prepared to grieve his uncle, Lieutenant Joseph Leavey, a New York firefighter who died in the south tower on Sept. 11.

Pope Benedict prayed for Sept. 11 victims and appealed to those with grievances to "always reject violence as a solution to problems and resist the temptation to resort to hate."

In the Sept. 11 attacks, 19 men hijacked airliners and crashed them into the World Trade Center, the Pentagon outside Washington and a field in Shanksville, Pennsylvania. Just weeks after the attacks, U.S. forces invaded Afghanistan to topple that country's Taliban rulers who US accused of hosting the al Qaeda leaders responsible for the Sept. 11 attacks.

Malaysia's former Prime Minister Mahathir Mohamad wrote on his blog that Arab Muslims are incapable of "planning and strategizing" such attacks. He added "it is not unthinkable" for former President George W. Bush to have lied about who was responsible.

The Taliban marked the anniversary by vowing to keep fighting against U.S. forces in Afghanistan and saying they had no role in the Sept. 11 attacks.

"Each year, 9/11 reminds the Afghans of an event in which they had no role whatsoever," a statement e-mailed to news organizations said. "American colonialism shed the blood of tens of thousands of miserable and innocent Afghans."