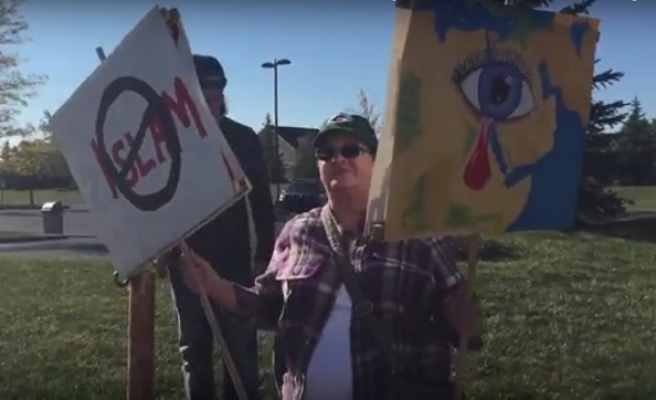 A woman demonstrator wishing to protest against 'dangers' of Islam outside the Noor Islamic Center in Ohio, U.S., was encountered by Muslim counter protesters who wanted to passionately, yet peacefully, explain her misconceptions about their religion, The Independent reported Wednesday.

The woman was given a hug by one of the members of the mosque, and later invited inside the mosque, where she was greeted with loud round of applause.

The protester had arrived at the Muslim centre in Ohio, with placards saying "No Shariah Law" on the day of anti-Muslim protests that had been organised across the U.S. and named the Global Rally for Humanity.

The centre's supporters engaged the middle-aged woman in a talk about President Barack Obama, the Quran and the situation in the Middle East. "That is how we work. A lot of people with these ideas have not actually met a Muslim," the mosque's spokesman, Adnan Mirza, said. "We focus on the similarities rather than on things that divide."

Confronted by a Muslim woman wearing a hijab who offered to pose with her for a photo by saying, "I’m an American too," protester accepted an invitation to enter the mosque and meet its members. As she entered the building they cheered.

The woman told the mosque's members that her husband and her pastor did not want her to come to protest. Either way, she then said things had not turned out as she had anticipated.