With only days left to the beginning of the Presidential election, issues such of gun control, security and immigration take top place in this years election 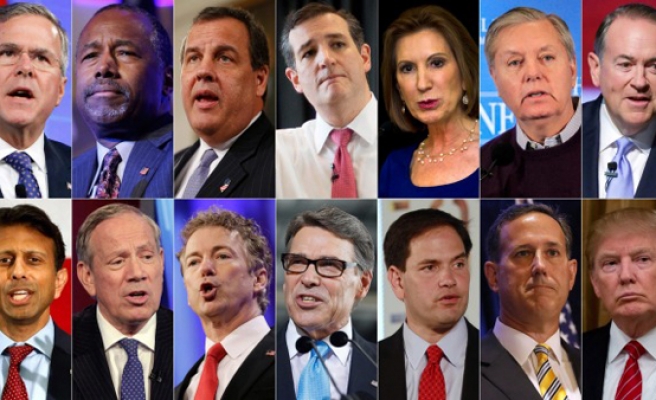 From immigration to the thorny issue of gun control, from America's flimsy economic recovery to the fight against rebels, White House rivals are clashing on multiple fronts as they woo voters.

If the state of the economy dominated the 2012 race in the aftermath of the financial crisis, the debate over keeping Americans safe amid heightened concerns over the threat of terrorism has emerged as a primary topic in 2016.

Here is what the candidates are focused on in the run-up to Iowa, which kicks of the presidential nominations contest on February 1.

After savage attacks in Paris claimed by ISIL and the killing of 14 people in San Bernardino, California by a US-Pakistani couple, the American appetite for waging war against ISIL radicals grew dramatically.

The issue vaulted to the top of the list of voter priorities, according to at least two major polls, and White House aspirants -- particularly Republicans -- seized on the fear.

Republican frontrunner Donald Trump fueled concerns about Muslims, insisting -- without evidence -- that thousands of Muslims in New Jersey were seen cheering the September 11, 2001 attacks on the World Trade Center.

Trump and other Republicans, including Senator Ted Cruz and New Jersey Governor Chris Christie, increased their saber-rattling rhetoric, slamming President Barack Obama's Syria policy as too weak and demanding both an intensified bombing campaign and more US special forces on the ground there.

Most Republicans also denounced Obama's landmark nuclear deal with Iran. The accord lifts sanctions on Tehran, and Republicans argue Washington gave away too much while receiving little in return.

Among Democrats, whose nomination contest has sparked less intense passion, former secretary of state Hillary Clinton, Senator Bernie Sanders and Maryland's ex-governor Martin O'Malley have highlighted what they say are the dangers of the Republican positions.

Democrats warn that such stances only highlight a "clash of civilizations" that serves as a jihadist recruitment tool.

Security issues recently have spilled into the immigration realm. The Democratic candidates are united in welcoming Syrian refugees, but Republicans say not so fast.

Trump again stands out from the crowd by calling for a ban on Muslims entering the United States -- a position that has sparked international outrage.

If Republican rivals believe such a policy is beyond the pale, they agree with him on the need to halt the influx of refugees from Syria and Iraq until the US administration is better able to vet those who apply.

Democrats, for their part, largely favor policies that would legalize most of the 11 million people living in the country illegally, half of whom are from Mexico.

Once again, Trump is the most bombastic of all, declaring he would build a wall on the US-Mexico border and seek to deport most undocumented workers.

It is a uniquely American challenge. After each deadly mass shooting at a school, the topic is resurrected, only to fade away.

Earlier this month, Obama announced a series of executive orders to tighten regulations on firearm sales, including those conducted online.

The president's measures would strengthen the existing background check system, and allow health care providers to report names of mentally ill patients into the database.

The orders were welcomed by the Democrats, who have largely backed his push for stronger gun control.

Republicans, who are historically closer to the pro-gun lobby, reacted with anger, arguing the policies violate the US Constitution.

If Republicans are hitching their 2016 success to national security, immigration and gun rights, the Democrats have made the economic record of the past seven years their rallying cry.

The US unemployment rate is 5.0 percent, its lowest since February 2008 before the financial crisis.

Since the crisis, more than 13 million US jobs have been created and stocks have rebounded, although the last month has seen a dramatic retreat in US markets.

There is still considerable debate over taxes.

Clinton, too, wants to raise taxes on the wealthiest Americans, but she opposes dramatic changes to the existing Affordable Care Act.

Republicans are broadly opposed to tax hikes, but are divided over supporting a "flat tax," a measure championed by Cruz.

His chief rival Trump calls for tax cuts across the board but has suggested an increase in tariffs on Chinese goods.