Arizona appealed a judge's decision to block key parts of the state's crackdown on immigrants and police in Phoenix arrested scores of activists. 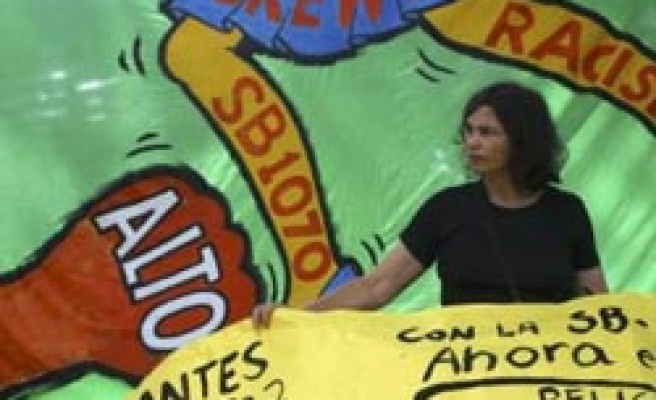 Arizona on Thursday appealed a judge's decision to block key parts of the state's crackdown on immigrants and police in Phoenix arrested scores of activists protesting the remaining measures in the law.

Lawyers for Governor Jan Brewer and Arizona asked the 9th U.S. Circuit Court of Appeals in San Francisco to lift an blocking the most intrusive parts of the law, known as SB 1070, and asked for the appeal to be handled quickly.

Several hundred Hispanic and labor activists, delighted by Wednesday's last-minute ruling, pushed ahead with rallies in central Phoenix, chanting and banging drums in protest at parts of the law that came into effect on Thursday.

Tensions over the law have inflamed a national debate over immigration, which has festered for decades and promises to play into the elections in November, when President Barack Obama's Democrats are fighting to retain control of Congress.

The law had drawn wide popular support in this state bordering Mexico, but was criticised by President Barack Obama and human rights groups.

Brewer issued a statement saying she had filed the appeal, asking that the suspended provisions "go into effect pending a decision on the merits of this case." The case was widely expected to go all the way to the U.S. Supreme Court.

The Republican-controlled state legislature passed the law three months ago to try to drive nearly half a million illegal immigrants out of Arizona.

Police arrested at least 48 Hispanic protesters after they blocked streets near a sheriff's office in the city center and the entrance to a jail.

A Reuters witness saw police dressed in riot gear arrest demonstrators, including an elderly female church minister. The protesters offered no resistance and police led them away in plastic handcuffs.

"We welcome the fact that the judge blocked some of the provisions in SB 1070 but ... we are continuing action to overturn the rest of the law, " said Pablo Alvarado, executive director of the National Day Laborer Organizing Network.

"Today is going to be worse that yesterday because there will be more laws on the books, more tools for cops," he said.

The fierce debate over illegal immigration stirs up strong passions in the United States, where 11 million illegal immigrants work in mostly low-paid jobs in the shadow economy.

The U.S. Marshals Service in Phoenix said Judge Bolton received hate mail at her court office after making her ruling. Bolton is an appointee of former President Bill Clinton, a Democrat, and some commentators have slammed her as an "activist judge" out of step with the country.

U.S. Rep. Raul Grijalva, an Arizona Democrat and staunch opponent of the law, meanwhile, closed a district office in Yuma after staff found a shattered window and a bullet inside. Police investigated the incident, but had no "potential motive," his office said in a statement.

Among blocked provisions of the law was one requiring a police officer to check the immigration status of anyone stopped or detained if the officer believed they were not in the country legally.

Immigrants would also have been required to carry their documents at all times and undocumented workers would have been forbidden to solicit work in public.

Measures not subject to the stay, and which went into effect on Thursday, included offenses making it illegal for drivers to pick up day laborers from the street and to transport or harbor an illegal immigrant.

The law triggered interest in copycat measures in as many as 20 other states around the country.

The opponents say it is unconstitutional and would lead to discrimination against Latinos, and Latino-looking Americans, but 65 percent of Arizona is seen to be in favour of the controversial law.

"We're not criminals, we're not hurting anyone ... We wish people would know that," said Franco Escamilla, an undocumented laborer from Mexico, as he waited outside a Home Depot store in Phoenix.

About 10 protesters were arrested in Los Angeles after they chained themselves together in the middle of a busy intersection during a demonstration over the Arizona law that drew about 200 people.