Ahmed Mohamed to showcase his invention at US President's residence 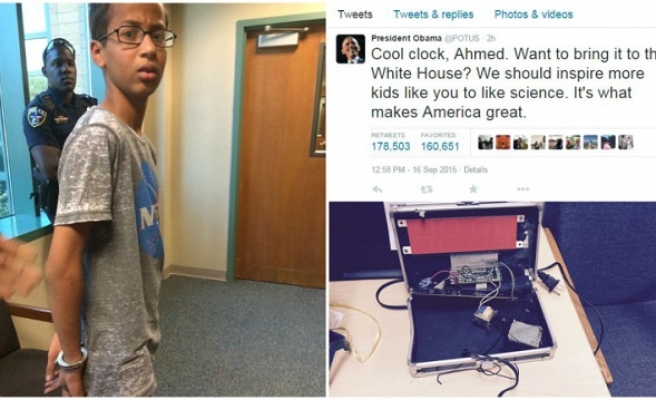 A Texas Muslim teen arrested after taking his homemade clock to school, on Wednesday accepted an invitation by President Barack Obama to show off his invention at the White House.

At a press conference outside his home in Irving, Texas, Ahmed Mohamed said he will take his clock to Washington but no date has been set for the visit that Obama requested via Twitter after #IStandwithAhmed became a worldwide top trending topic on the social media platform.

"I brought the clock to impress my teacher but when I showed it she saw it was a threat to her. So I was really sad that she took the wrong impression of it and I got arrested later that day," Ahmed said of the series of events that began Monday at MacArthur High School.

The 14-year-old acknowledged the enormous support he has received on social media from several famous figures, and vowed to use his experience to help other children in similar situations.

"It was really outstanding,” he said of the support. “I did not think it would go this far. But just as I have done this far, I will try my best not just to help me but every other kid on the entire globe who have a problem like this."

The clock that got Ahmed into trouble may have been the most mundane project for the young inventor who has managed to build an array of things, including a pair of speakers, and who said he has an invention he constructed by harnessing nude magnets.

The world will have to wait for that one, though, because the budding Einstein refrained from getting into specifics before he had patents for his invention.

Ahmed said he would like to study engineering at the renowned Massachusetts Institute of Technology after he completes high school – a different one in which he is currently enrolled.

He said he was still suspended as of Thursday, adding that his clock has not yet been returned by police who cleared him of charges earlier Wednesday.

Asked if he expected an apology from the school or police he said: "It doesn't bother me that they didn't apologize. I just know that I have all these supporters."

Ahmed’s father, Mohammed Hassani Mohamed, said he is grateful for the support shown to his son by Obama and Hillary Clinton after the embarrassment he suffered by being handcuffed and carried out of school in front of his classmates and teachers.

"Ahmed Mohammed, I am proud of him. He fixed my car, my electricity, my phone and my computer, and his go cart," he said.

The elder Mohamed was not alone in expressing pride in Ahmed.

The Mohameds’ Egyptian American neighbor, Tariq Azzam, whose son is a classmate of Ahmed, told Anadolu Agency that Ahmed is decent boy with great talents.

"He's a good boy. He not only makes electronic things, he is also very good in playing basketball and soccer. He and my son are always together," he said.

Ahmed Mohamed's story has raised once more the issue of Islamophobia in the U.S. The Council on American-Islamic Relations (CAIR), the nation’s biggest Muslim civil rights organization, is investigating the case.

Alia Saleem, CAIR's executive director for the Dallas Fort Worth area told Anadolu Agency that the group contacted Mohamed’s family earlier this week to help them find legal counsel to take on the school and the police department.

"Basically we understood that there was a lot of hard things. It was really inappropriate the way they approached Ahmed," Saleem said. "We saw that there were some really big red flags."

Saleem said the police department tried to cover its tracks by saying Ahmed did not provide a proper explanation for his clock.

"There is too much evidence showing that they did not act appropriately.”

The overall climate for Muslims in the U.S. contributed to Ahmed’s detention, Saleem said, including a number of high-profile anti-Isamophobic incidents in Texas.

In May, two suspects were fatally shot and a security officer was injured outside a Prophet Muhammad cartoon contest in Garland.

In March, Ahmed al-Jumaili was killed in Dallas as he took pictures of the first snowfall he had ever seen. Al-Jumaili had fled violence in his Iraqi homeland only three weeks before he was shot.

A University of California Berkeley sociologist told Anadolu Agency that Ahmed’s case illustrates "the pernicious impact of Islamophobia where one's Muslim name is sufficient grounds for arrest and investigation that violates constitutional and civil rights.

"Ahmed's crime is contained in his name and the police and authorities have been pre-conditioned to assume terrorism intent based on the name and religious affiliation," said Hatem Bazian.

A spokeswoman for Ahmed’s legal counsel at the Constitutional Law Center for Muslim in America told reporters  she would not provide details about any possible legal details.