At least 17 killed as tornadoes rip through Arkansas, Oklahoma

TV footage showed houses ripped off their foundations, with cars toppled on top of the rubble. 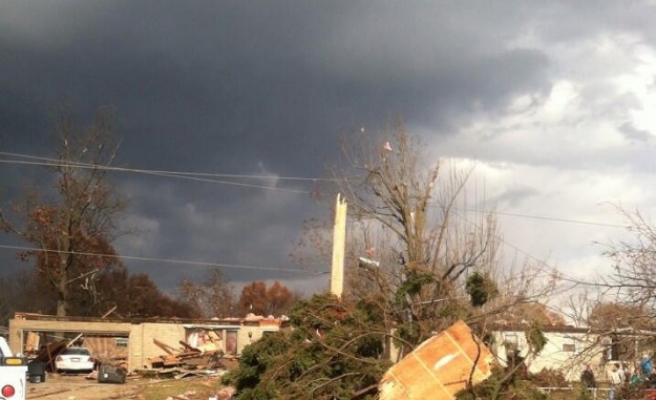 Tornadoes ripped through the south-central United States on Sunday, killing at least 17 people in Arkansas and Oklahoma and wiping out entire neighborhoods, authorities said as rescue workers searched in darkness for survivors.

Winds ripped houses off their foundations and flipped cars on top of the rubble in the small town of Vilonia in central Arkansas' Faulkner county, one of the worst-hit communities, television pictures showed.

Arkansas authorities said at least 10 people had died in Faulkner and six more across the state - the first reported fatalities of this year's tornado season. Another person was killed in neighboring Oklahoma, said the sheriff's department.

Searchers were continuing to dig through rubble in Vilonia and a spokesman for the County Sheriff's office said there was a "mass casualty situation".

"An entire neighborhood of 50 or so homes has been destroyed. Many homes are completely gone except the foundation ... There is more devastation like this in other parts of Arkansas," state congressman Tim Griffin told Reuters.

Motorists searched crushed vehicles for victims while others stood dazed on the road. Authorities closed the route.

A tornado hit the east side of Mayflower at around 7.30 pm, killing at least one person, tearing up trees and bringing down power lines, making it difficult for the emergency services to find stricken areas in the dark, officials there said.

"It's extremely hazardous here right now," said Will Elder, an alderman in the city. "The power lines are down, roads are blocked and they will have to proceed with caution."

The Arkansas National Guard was deployed to help out in the state.

The Arkansas Department of Emergency Management said on its website 10 deaths had been reported in Faulkner, five in Pulaski county and one in White county.

At least one other person was killed in a tornado in the small town of Quapaw, in the northeast corner of neighboring Oklahoma, according to Ottawa County Sheriff's Department spokesman Derek Derwin.

That twister was spotted in the town 200 miles northeast of Oklahoma City at about 5:45 p.m., according to the weather service.

Media and the National Weather Service reported that two people were killed.

Overnight tornado watches and warnings were announced in several parts of Arkansas, Tennessee and Mississippi.