'So as hard as it is, we have to keep trying to reach a political settlement,' US Vice President says 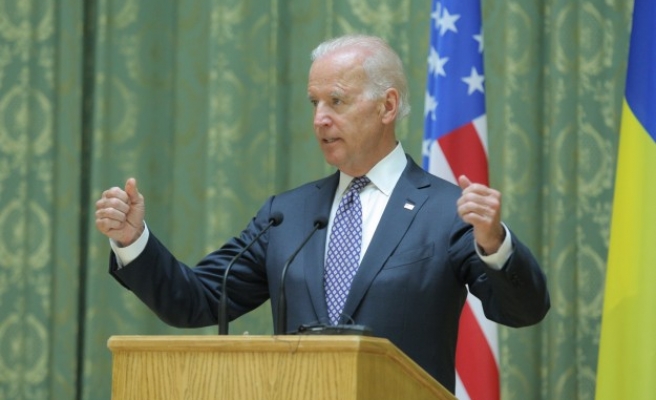 US Vice President Joe Biden ruled out a military solution to end Syria's conflict in remarks published Monday, calling for a political transition despite the difficulty.

"That should be clear to everyone," Biden told Abu Dhabi newspaper The National at the start of a visit to the United Arab Emirates ahead of travelling to Israel, the West Bank and Jordan.

"So as hard as it is, we have to keep trying to reach a political settlement," he said.

Saudi Arabia, which backs the Syrian opposition, and ally the UAE have said they are willing to send ground troops to Syria under US command to battle the ISIL group.

Biden's comments come as President Bashar al-Assad's regime and its opponents are to this week resume UN-sponsored peace talks in Geneva as a fragile ceasefire holds in Syria.

The talks are aimed at ending the five-year Syria war that has killed more than 270,000 people, displaced millions and devastated the country.

The fate of Assad, who is refusing to step down, has been one of the main sticking points in the talks.

"A political solution between the parties is the only way to end the violence and give the Syrian people the chance they deserve to rebuild their country. To create a credible, inclusive, and non-sectarian system, a new constitution and free and fair elections," Biden said.

Biden said the truce that went into effect in Syria on February 27 "seems to be holding" but was "not perfect".

He noted however that "levels of violence have dropped significantly across the country" and said this opened the way for the delivery of desperately needed humanitarian aid.

Biden also praised US relations with the UAE and its partners in the six-nation Gulf Cooperation Council, which also includes Saudi Arabia, Qatar, Kuwait, Bahrain and Oman.

He acknowledged the "challenges" posed by the historic nuclear deal struck last year between Iran and world powers and the concerns it raised in GCC countries who are wary of Tehran.

"That's why we worked so hard to achieve a nuclear agreement with Iran, because as dangerous as Iran's actions are, they would be exponentially greater if Iran possessed a nuclear weapon."

He said steps were being taken to bolster the security of the GCC monarchies to be able to "deal with Iran diplomatically from a position of strength".