Bill and Hillary Clinton's daughter married her long-time boyfriend in the picturesque New York village of Rhinebeck in what has been dubbed America's royal wedding. 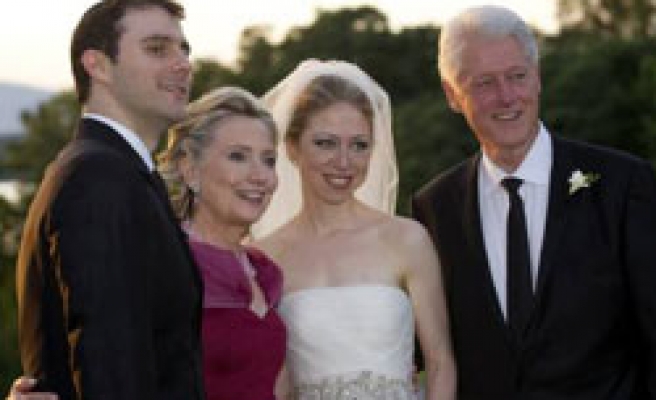 Bill and Hillary Clinton's daughter married her long-time boyfriend in the picturesque New York village of Rhinebeck on Saturday in what has been dubbed America's royal wedding.

Chelsea Clinton -- the only child of the former U.S. president and the U.S. secretary of state -- wed Marc Mezvinsky at Astor Courts, an historic 50-acre (20-hectare) estate on the Hudson River, about 100 miles (160 km) north of New York City.

"Today, we watched with great pride and overwhelming emotion as Chelsea and Marc wed in a beautiful ceremony at Astor Courts, surrounded by family and their close friends," Bill and Hillary Clinton said in a statement.

"We could not have asked for a more perfect day to celebrate the beginning of their life together, and we are so happy to welcome Marc into our family," the statement said.

"On behalf of the newlyweds, we want to give special thanks to the people of Rhinebeck for welcoming us and to everyone for their well-wishes on this special day."

The statement, sent just after 7:30 p.m. (0030 GMT Sunday), did not indicate exactly when the nuptials took place.

Photos emailed to Reuters by Clinton aides showed the bride and groom walking down a broad outdoor aisle between rows of guests. Chelsea wore a strapless white gown with a fitted bodice and full skirt with platinum-colored beading at the waist and a long white veil.

The groom wore a simple black tuxedo going down the aisle and in a photo with the Clinton family, and a white prayer shawl and yarmulke in separate photos with Chelsea under a flowering tree and amid wedding guests.

The photos were in sun and shade, with lighting suggesting they were taken in the late afternoon.

In the one photo in which she appeared, Hillary Clinton wore a magenta gown. Bill Clinton, who is pictured walking Chelsea down the aisle, wore a simple black tux with a white boutonniere in his lapel.

On Friday night, Bill and Hillary Clinton waved to crowds of onlookers as they arrived at the historic Beekman Arms Inn in the center of Rhinebeck for a late-night party for some of the wedding guests.

Apart from the parents of the bride, the only other high profile guests seen in Rhinebeck have been Bill Clinton's former secretary of state, Madeleine Albright, actors Ted Danson and Mary Steenburgen and fashion designer Vera Wang.

Guests boarded buses in Rhinebeck to be taken to Astor Courts about 5 p.m. EDT (2200 GMT)

Chelsea Clinton, 30, and Mezvinsky, 32, have known each other since they were teenagers. He is an investment banker, whose parents Marjorie Margolies-Mezvinsky and Edward Mezvinsky were once Democratic U.S. House of Representatives members.

Chelsea Clinton, who worked at a New York hedge fund and has more recently studied health policy at Columbia University, has kept a low profile since her father left the White House in January 2001, although she campaigned for her mother during her failed run for the 2008 Democratic presidential nomination.

Signs and pictures congratulating the newlyweds hang in many shop windows in Rhinebeck, which has been swarmed by media around the world for an event that experts estimate to have cost between $3 million and $5 million.

Airspace above Rhinebeck has been closed for 12 hours from 3 p.m. EDT (1900 GMT) Saturday for the wedding and media were kept well away from the entrance to Astor Courts. Security in the area was comparable to that surrounding state visits.

The guest list was reported to be between 400 and 500, but did not include a very understanding President Barack Obama.

"Hillary and Bill properly want to keep this as a thing for Chelsea and her soon-to-be husband," Obama said on "The View" talk show on Thursday. "It would be tough enough to have one president at a wedding. You don't want two presidents."